Soul Desert: Parts I and II 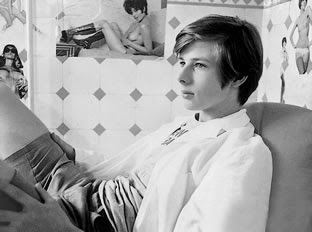 A soundtrack that eclipses the film with which it's associated is not an anomaly. Pink Floyd's More (1969) is a case in point. Though I've owned the CD for years, I still haven't watched Barbet Schroeder's drug-filled debut. Due to a combination of distribution problems and rights issues, Deep End has been difficult to see for decades. What distinguishes the title from other musically-oriented cult classics
is that it features very little music. But that music has taken on a life of its own.

No band in the world illustrates the inadequacies
of today's musical terminology more than Can.
-- Derek Jewel, The Sunday Times (1974)

I had been looking forward to seeing Jerzy Skolimowski's second English-lan-
guage effort ever since I discovered Can's stunning collection, Soundtracks, in 19-
82. Twenty-six years is a long time to wait to see-or do-anything. Well...it was worth the wait. And then some. In fact, it's unlikely I'll see a better film this year.

When I was involved with college radio in the 1980s, the Cologne-bas-
ed band was a revelation like no other. Public Image Limited and the Fall
were something, but Can was something else altogether (and they count
the Fall's Mark E. Smith and PiL's Jah Wobble among their many fans).

The first record I heard was 1980's handy confabulation of odds and
sods, Cannibalism I. Then came 1970's Soundtracks, an enduring
favorite. As the title indicates, it's also an assemblage, rather than a
proper album. In this case, each song corresponds to a specific Eas-
tern European film (all five appear in the cover illustration above).

Like UK contemporaries Soft Machine and Floyd, Can poached from pop, jazz,
and experimental music. And like Brian Eno, with whom drummer Jaki Liebe-
zeit would collaborate, they sound like they're from another time-possibly ev-
en another world (pun intended). The word "psychedelic" doesn't cut it. Then ag-
ain, Mooney and Suzuki sang in their own unique argot, and bassist Holger Czu-
kay and keyboardist Irmin Schmidt studied with the late Karlheinz Stockhausen.

Numerous alternative acts, notably Stereolab and LCD Soundsystem, have
drawn inspiration from the quintet. Rapper Kanye West even samples them
on 2007's Graduation, but nobody sounds exactly like "the Can." Or ever will.

As with Michelangelo Antonioni's Blow-Up (1966), Deep End looks at Swinging London from the outside in. But just as Blow-Up doesn't feel Italian, the Munich-filmed Deep End doesn't feel Polish (or German) any more than Roman Polanski's UK-situated Repulsion (1966). [Skolimowski co-wrote Polanski's 1962 debut, Knife in the Water.]

As David Thompson stated in last August's Sight & Sound ("75 Hidden
Gems: The Films That Time Forgot"), "The energy of a foreigner tackling
British territory easily outweighs misjudgments of class accents, and today
the soundtrack by Can and Cat Stevens would probably win a high cool rating."
(Moulder-Brown's appealing accent is more plummy than cockney.)

These are all thoroughly British films, regardless as to the non-Brits be-
hind the camera--or on the soundtrack. And like the UK-born Whitehead's
wide-ranging expose, they're death knells for an era, not celebrations.

I became acquainted with the Smiths' "Half a Person" five years after Can
(courtesy 1987's double-disc set Louder than Bombs). I didn't know it then, but
after watching Deep End, it occured to me that Morrissey's sad lament could al-
most be a loose adaptation of Skolimowski's sixth film, even if Moulder-Brown's
Mike is 15 rather than 16. Further, he works in the Newford Bath House, rather
than the YWCA, but he is indeed a "back scrubber." He's also "clumsy and shy."

David Thompson paints Susan as "a divine demi-bitch out for everything she
can get." He adds that "Skolimowski's direction is extravagant, crude and tender
by turns, slapping the audience in the face with its insouciance and weird wit."

Deep End begins like a comic gloss on Blow-Up and ends like an art-dam-
aged The Loneliness of the Long Distance Runner (1962) or If... (1968). But
while Tony Richardson and Lindsay Anderson allowed their angry young
men pyrrhic victories against unbeatable foes, Skolimowski's outclassed
anti-hero makes his move too late. Mostly, he makes the wrong move.

Courtenay and Christie in Billy Liar