Between my last SIFF dispatch and this one, I seem to have missed more films than I've seen. It isn't completely my fault. Aside from a full-time job and weekly freelance assignments, two of the films I attempted to see were cancelled.

On Saturday, June 4, I got to the Uptown in time for a 12pm screening of Mekko with director Sterlin Harjo in attendance (I reviewed his documentary about Native American spirituals, This May Be the Last Time, in February). I even caught a glimpse of the filmmaker outside the theater chatting with a pass holder. That's when I found out there was a power outage in the theater. I don't know if they ever identified the cause, but programmer Maryna Ajaja speculated that it might be due to the construction in the area, like at the other end of the block (where Kidd Valley once stood). SIFF staffers said they hoped power would be restored in time for the screening. It wasn't.

So, I bided my time until the next screening, Burn Burn Burn with director Chanya Button and Downton Abbey actress Laura Carmichael ("Lady Edith") in attendance. I had seen a trailer for the road trip comedy a few days before, and it didn't look too promising, but The Sun Break's Chris Burlingame and Three Imaginary Girls' Amie Simon praised the film, so I added it to my schedule instead of the competing screening about Austin City Limits, Keith Maitland's A Song for You, which seems likely to air on PBS at some point. (Another film I missed? Maitland's acclaimed historical documentary Tower, which will air as part of Independent Lens's 2016-2017 season.)

Waiting 40 minutes for the first film was one thing, but this time, I waited 30 minutes before they announced that they were going to reschedule the 2pm screening for 3pm, so I waited another hour, but at five minutes after, they canceled the screening altogether, so I took a Pagliacci's break.

Near as I can tell,
neither screening was rescheduled, though they did re-
schedule Queen of Ireland, which was also set to screen that morning. I'm not blaming SIFF for any of this, especially since they had no control over the inconvenient outage, which ended in time for the premiere of Megan Griffiths' The Night Stalker at 5:30pm. They also
gave vouchers to all
of the disenfranchis-
ed ticket holders.

Though Griffiths' Eden impressed me, I wasn't crazy about 2014 follow-up
Lucky Them, which suffered from an underdeveloped script. A friend who
caught a work-in-progress screening of The Night Stalker wasn't convinced by the scenes with the adult Kit (Scandal's Bellamy Young), so I went into
the film with modest expectations, unlike other locals, who get excited every time Griffiths embarks on a new project. I take things on more of a case-by-case basis, and in this case, The Night Stalker, which aired on LMN on June 12, worked for me. In its bifurcated structure, Griffiths' fourth feature recalls Allison Anders' Things Behind the Sun, another film that aired on cable after screening at SIFF, and centered on a self-destruc-
tive musician who can't move forward until she acknowledges a traumatic event from her past (Anders drew from her own rape for the story).

I wouldn't say
The Night
Stalker works
as well, but it
sidesteps
many of the
stereotypes of
the made-for-
TV true crime genre (soft-
focus flash-
backs, teary funerals for victims, and the like). Al-
though Young isn't as effective as Lou Diamond Phillips, who plays ser-
ial killer Richard Ramirez, her performance grew on me as she became more comfortable with it. She's stiff and self-conscious in the opening se-
quence in ways that go beyond the fact that her attorney character is meeting with a brutal murderer for a face-to-face. Kit aims to elicit a con-
fession from him before an innocent man faces execution for a crime she believes Ramirez committed. Griffiths invented that part of the narrative, but it establishes a plausible reason for Kit, who was fascinated with Ra-
mirez as a teenager, to put her own betrayal and sexual abuse in context.

Phillips, who was a live wire at the screening, is terrific as Ramirez. If he isn't a complete monster, he isn't a wounded little boy either; he's an unrepentant killer. He's also lonely, perceptive, and manipulative. That's a tricky balancing act to pull off. Chelle Sherrill is also good as the young Kit, who lives in fear of Ramirez's evening exploits, but who follows his media coverage the way today's kids follow celebrities on Instagram--not necessarily because they're attracted to them, but because they want to see what they'll do next. And to relieve the boredom of suburban living.

Though Grif-
fiths based her
screenplay on
Phillip Carlo's
book, she drew
from her own
Riverside, CA
childhood for
Kit, who likes
heavy metal as
much as Ra-
mirez. At the
Q&A, Griffiths
said that he
was a big
AC/DC fan,
but she knew
the music
rights would be beyond her means, so she opted for Pentagram instead
(Kit has a Pentagram t-shirt, a Bobby Liebling poster on her wall, and a
Pentagram song plays over the end credits). It turns out to be a particu-
larly apropos substitution, since the band's occult image and Liebling's
soulful voice add spooky gravitas to a film that might have felt too much
like a pop-cult period piece otherwise. It doesn't hurt that the Satan-ref-
erencing Ramirez was fond of pentagrams, although I didn't know that
until I read Bob Calhoun's three-part SF Weekly series on the killer. 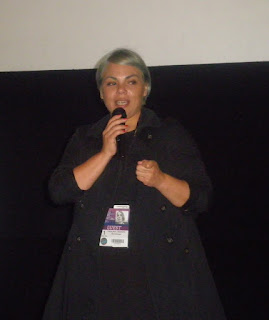 At the Q&A, Griffiths and Phillips performed a karaoke duet on Bon Jovi's "Blaze of Glory" from Young Guns II. Clearly, they had fun working together. As SIFF programmer Clinton McClung pointed out on Twitter, Phillips deserves credit for praising women directors and for noting that Griffiths hired women for most (if not all) of the key positions on the film.

Once I read the description of Miguel Ángel Vidaurre's Red Gringo, I knew I couldn't miss this documentary. The story is so bizarre that I'm surprised I hadn't heard it before. In short, Dean Reed was a Colorado-born pop singer in the 1960s with a fabulous head of hair and a strong South American following. Why he rose above the pack, I couldn't say, but it convinced him to tour the continent. In Chile, the ladies went wild, so he made the surprising decision to stay, but instead of continuing on in a pop vein, he transformed into a protest singer. Despite his American roots, he sang in Spanish, leading me to wonder if any of his original fans felt let down. No longer something foreign or exotic: he had become one of them.

On the basis of the material in the film, Reed was a talented singer, a charismatic performer, and a persuasive speaker. He probably would've done okay if he had remained in the States, but he wouldn't have had the same impact. Sadly, his embrace of left-wing politics may have contri-
buted to his demise in 1986, by which time he had traded Chile for East Germany (over the years, he also lived in Peru and Argentina). Though officials ruled his death an accident, some associates suspected foul play.

Vidaurre, who worked on the film for six years with his wife, producer Paulina Obando, builds it around archival footage in which Reed speaks for himself through interviews, speeches, and song lyrics, but the scarcity of outside voices gives short shrift to his personal life. Only at the end does a newscaster note the wife (East German actress Renate Bloom) and two daughters he left behind. I'm not sure why Vidaurre chose not to interview them, especially since they've attended screenings in Chile to support the film. My guess is that he wanted Reed to recount his life as a public figure from his own point of view, but it would've been nice to learn more about his private side.

Other films I've seen since May 31 include Author: The JT Leroy Story, Lamb, Olympic Favela, Mountains May Depart, The Love Witch, A Walk on the Moon, Captain Fantastic, and Southside with You (other non-SIFF films include Janis Joplin: Little Girl Blue, T-Rex, Golden Gate Girls, Nefertiti's Daughters, and Maggie's Plan). Of the films I was sorry to miss, Cameraperson, Creepy, Dead Slow Ahead, and The Fits top the list.

And that's a wrap! SIFF '16 concluded on Sunday with a gala screening of Jocelyn Moorhouse's starry adaptation of Rosalie Ham's 2000 novel, The Dressmaker. The Golden Space Needle (audience award) for best film went to Matt Ross's Captain Fantastic with Viggo Mortsensen (see the full list here). Moorhouse, Ross, and Mortensen all came to town over the final weekend to support their films. My favorite award: best actor special mention to Jumpy the Dog in Ti West's In a Valley of Violence.

Postscript: Burn Burn Burn will return to the Uptown on June 18.
Posted by kathy fennessy at 7:56 PM No comments: