Mennonites in Mexico, or Lust in the Austere Dust

"I couldn't stop laughing, it was just too much."
-- IMDb Message Board comment

To describe Silent Light, the third feature from Carlos Reygadas, as "Mennonites in Mexico" is to prize surface accuracy over spiritual truth. Reygadas's film could focus on most any subset of people anywhere, but that seemingly bizarre juxtaposition caught my attention as surely as if he'd made a movie about Muslims in Ireland or Protestants in Iran.

The Calvinists of Denmark's Carl Theodor Dreyer and the Catholics of France’s Robert Bresson may seem less surprising, but Reygadas's effort is as much a work of transcendent cinema: a group lives within a code that denies their essential human nature and yearn to breathe free, but how can they break from the rules and regulations that helped to shape them?

It's easy to over-simplify the minimalist story lines driving such films, and it's just as easy to laugh at them if you're feeling impatient—or "sinister," to quote Belle and Sebastian—because the pace is usually glacial and the tone is beyond sincere. But the visuals are often just as gorgeous, like cinematographer Alexis Zabe's close-up of heavy feet trudging through a flowery field (crunch and all). That said, nothing parodies itself quite like an attempt at transcendence that fails to take flight, i.e. images that just lay there on the screen: flat, dull, and dead.

Not so in Silent Light, where Zabe lends Reygadas's static compositions an unearthly glow. He luxuriates in the Serengeti-like hills in which Johan (Cornelio Wall) and Esther (Miriam Toews) make their home, before introducing them and their six kids (the mostly non-professional cast speaks Plautdietsch, a German-Dutch hybrid, adding to the alien affect).

Austerity aside, they seem like a contented clan, until the unguarded moment in which Johan starts to sob. A few frames later, he picks up a crankshaft for his tractor, as if nothing had happened. Then he admits to mechanic Zacarias (Jacobo Klassen) that he's still seeing Marianne (Maria Pankratz). He tried to stop, but "the pain won't stop digging in." Johan cares deeply for Esther, and feels "like lead being poured into my guts."

You'd think his friend would encourage Johan to be a faithful husband, but he senses something spiritual in this irresistible attraction to Marianne, as if she's his true soul mate, rather than his wife. Johan's preacher father, however, believes that "what is happening to you is the work of the enemy." Either way, Johan continues to see the single restaurateur. 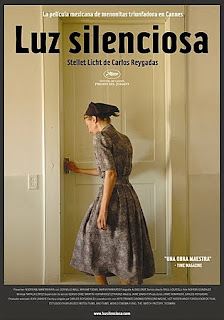 Were this a Dreyer film, there would be no nude bathing scenes or deep soul kisses, but Reygadas (Japón, Battle in Heaven) puts his own earthy spin on the genre rather than recreating what's come before. That said, the outdoor bathing ends when winter sets in, indicating that months have passed and Johan is still vacillating between his wife and his mistress.

Then it's summer again, and a drive through the rain changes everything. Johan can't choose between the women, but nor can he continue as a man split in two, so fate steps in to sort things out, though Reygadas suggests that what happens at the end might not really be happening at all. To paraphrase the dissatisfied viewer above, I didn't laugh, but I'm not sure I bought it either (plus, Dreyer and Bergman beat Reygadas to the punch). Until that point, however, the film had me in its languid spell, and the epilogue is especially enchanting.

Silent Light continues at the Northwest Film Forum through 4/9 at 7 and 9:30pm. The NWFF is located at 1515 12th Ave. For more information, please click here. Images from DVD Times and Gothtronic.com.
Posted by kathy fennessy at 11:00 PM No comments: