A Hodgepodge of Other Movies: 1979's Star-Studded Italian Sci-Fi Whatsit The Visitor 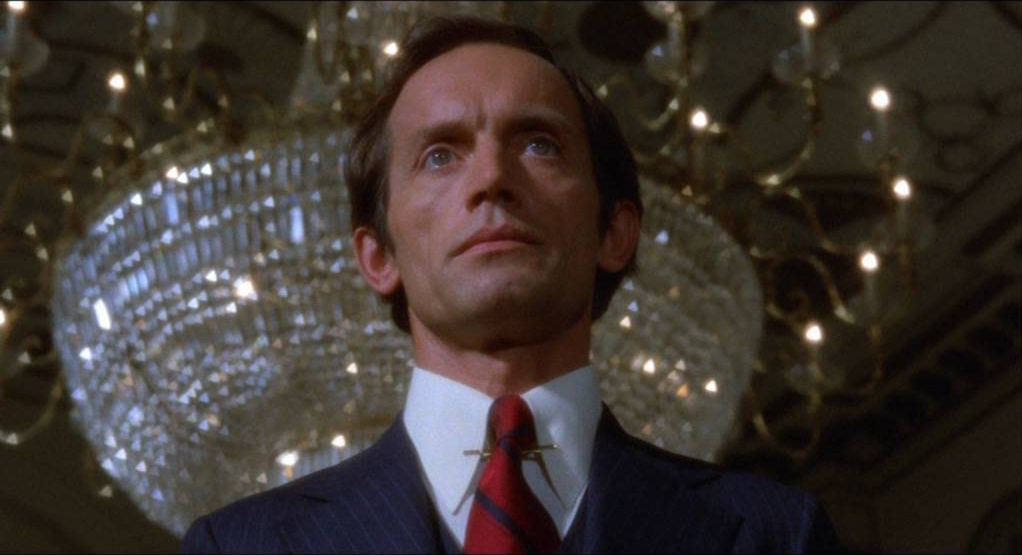 THE VISITOR / Stridulum
(Giulio “Michael” Paradisi, USA/Italy, rated R, 1979, 108 mins)
The Visitor is one of those what-the-fuck films that thrived in the anything-goes 1960s and 1970s.
The financing would come from all over the place, the writers and directors were often--but not exclusively--unknowns, and the casts were a crazy, mixed-up collection of no-names and big stars fallen on hard times...but that doesn't mean they were all bad (I quite like 1967's Grand Slam, another Italian hodgepodge with Janet Leigh and Edward G. Robinson).
Accordingly, Italian actor-turned-director Giulio Paradisi (La Dolce Vita, 8 1/2) lifts from The Birds, The Exorcist, Star Wars, and any other film that happened to capture his fancy at the time. He even expands his cherry-picking reach for a funhouse mirror sequence towards the end which plays like a cross between The Lady from Shanghai and Enter the Dragon.
In the prologue, a hooded figure walks across the desert towards actor-director John Huston clad in Obi Wan Kenobi drag (I'll assume Paradisi cast him based on a superficial resemblance to The Exorcist's Max von Sydow). Once the small creature is standing in front of him, its robe falls to reveal a creepy, doll-like girl covered with fake snow. She disappears as quickly as she arrived. And there you have it: The Visitor is that kind of film. In the next scene, a Joaquin Phoenix-looking teacher (Django's Franco Nero) with long blond hair and blue eyes--very Glamour Shots® Jesus--tells a class full of bald boys a convoluted story about the man, a mutant named Sateen who came to Earth to escape the war ravaging his home planet. Apparently, Sateen fathered all these cult-like kids--even though he's brain dead. Or something. Logic slips off the screen before it has a chance to take root.
From there, the action moves to a basketball game in Atlanta. Watching, along with Ray (Lance Henricksen, one year after Alien), the owner of the home team, is a little girl with feathered hair and big white sunglasses. She's Katy (Paige Conner), eight-year-old daughter of Ray's girlfriend, Barbara (The Gumball Rally's Spokane-born Joanna Naill), i.e. the girl from the desert. (If you've always suspected that Henricksen--much like Harry Dean Stanton--was born old, this film will disprove you of that notion.)
The Visitor then turns on Ray's attempts to impregnate Barbara so she'll give birth to a son, but she already has one weird kid. She doesn't want another, except Miguel Ferrer's cabal is counting on him to make it happen. When Katy accidentally shoots her mother, it puts a crimp in their plans.
Just when things can't get much stranger, noir icon Glenn Ford (four years away from J. Lee Thompson's Canadian slasher Happy Birthday to Me) shows up as an investigator and Shelley Winters (who became a regular presence in Italy in the 1970s) appears as an inexplicably French maid-garbed housekeeper.
The rest of the film revolves around various attempts to get a woman pregnant against her will. The Visitor may just be a low-budget quickie designed to make money, but I found the idea repellent. Worse yet: Barbara turns into more and more of a human punching bag as the film goes along (the opposite of Naill's kickass role in Jack Hill's Switchblade Sisters).
The overwrought, TV-quality score is amusing and Paradisi conjures up a stirring atmosphere through bird cries and rumbling sound effects, but the acting is mediocre at best--Conner is particularly wooden--and as fucked-up as this thing may be, it never goes as far as I'd been led to believe. So, is it worth seeing? Sure. Some things simply have to be seen to be believed.
The extras on the home-video release include featurettes with writer Luciano Comici,  cinematographer Ennio Guarnieri (Swept Away), and a bemused Henricksen, who aptly calls The Visitor "a hodgepodge of other movies."
The Visitor is available to stream for free on Peacock, Prime Video, and Tubi. It's also on Blu-ray and DVD via Alama Drafthouse. It may be damning it with faint praise, but the poster image (which also appears on the home-video release) for the 2014 reissue is an all-timer. Images from the IMDb.
Posted by kathy fennessy at 6:59 PM No comments:

This is a revived version of a 2014 Line Out post about Bill Morrison's 2013 documentary, The Great Flood (these posts were purged from the internet some time after The Stranger pulled the plug on their music blog). 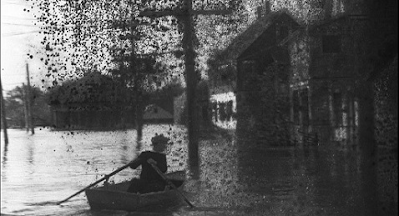 Seattle composer and guitarist Bill Frisell, who moved here from New York in the 1980s, provides the evocative score for this look back at the Mississippi River Flood, the most destructive flood in American history. As an opening credit explains, the tributaries of the river swelled in 1926 and breached their levees in 1927, displacing over one million people.

Bill Morrison, director of 2002's found-footage elegy Decasia, has edited archival footage from various collections into a hybrid documentary-art film-history lesson. At times, the black-and-white images become abstract, but only for seconds at a time, as he juxtaposes the damage to the land with the damage to the nitrate film stock with its flecks, scratches, splotches, and jagged edges.

Morrison eases into the scenario with aerial material that provides a distancing effect, particularly since he eschews dialogue or narration. Patterns and designs emerge, but the actual devastation remains at arm's length. People look like ants scampering around until he moves into specific chapters, like "Sharecroppers" in which African-American figures work the land as Frisell's score honors their efforts. Morrison doesn't have to cite Hurricane Katrina; the connection becomes clear of its own accord, especially since the affected cities included New Orleans.

Other chapter headings include "Evacuation," "Aftermath," and "Migration." In these sections, citizens attempt to drive down watery streets, empty out their homes, relocate livestock, and paddle boats toward dry land. "The 1927 Sears Roebuck Catalog," on the other hand, flips (by way of invisible hand) through the pages of the retail door stopper to the strains of a jaunty tune. These are the items people of the Jazz Age owned or wanted to own—items the waters washed away or left alone.

Not featured in the film. The flood inspired this Southern duo, who would, in turn, inspire a Led Zeppelin song (and later, a Kristin Hersh cover). It's where Morrison ends the film: with the migration of jazz and blues musicians to the North—a development that would transform American music.

Throughout the film, Frisell's score, which he recorded live at The Moore Theater, ranges from playful to elegiac. Instruments include trumpet (Ron Miles), bass (Tony Scherr), drums and vibes (Kenny Wollesen), and his blurry, smeary guitar. Frisell previously scored a series of Buster Keaton films, and he has an affinity for silent cinema, possibly because there's always been a nostalgic quality to his sound. He doesn't tell you what to think or what to feel, but he sets the scene.

The Great Flood offers a meditative, purposefully Brechtian examination of destruction. There are scant images of sickness or death—I only noticed one person on a stretcher—and Morrison doesn't identify any civilians by name, but loss lies within the scratches and splotches; unseen, but ever-present.

The Great Flood plays The Grand Illusion through Mar 27. Next month, they keep the music going with the Slint documentary, Breadcrumb Trail.
Posted by kathy fennessy at 10:38 AM No comments: