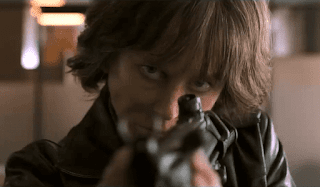 The film begins with a body. As all detective dramas must.

A thoroughly de-glamorized Nicole Kidman, in Charlize Theron-in-Monster-mode, plays the grubby gumshoe at the center of Karyn Kusama's sun-blasted noir. Granted, in Patty Jenkins's Monster, Theron played a criminal (serial killer Aileen Wuornos), whereas Kidman's Det. Erin Bell is a crime-solver, but she shares the unkempt hair and charisma-deprived personality. I wouldn't call her ugly, though; it's more that she looks unwell and chronically unhappy.

Bell suspects that the victim has a connection to a case she worked 17 years ago. Back then, the fresh-faced Bell worked undercover with Chris (an effectively low-key Sebastian Stan) to infiltrate a robbery ring. She has the same three dots tattooed on the back of her neck as the dead man.

As set-ups go, it's a familiar one, but it's always a pleasure to watch Kusama shape genre to her own ends as she did in Girlfight, a sports drama about a teen girl determined to be a boxer (Michelle Rodriguez in her silver-screen debut), and The Invitation, a horror film about a dinner party gone terribly awry (I haven’t seen Jennifer’s Body or Æon Flux, her sole big-budget production, which featured Theron in the title role).

To solve the case, Bell has to revisit her past, which helps to explain her present, like the estrangement between her and her 16-year-old daughter, Shelby (a suitably pouty Jade Pettyjohn). Bell's drinking led the court to award her ex (a bearded, sad-eyed Scoot McNairy) custody, but now Shelby appears to be heading down the same path. When Bell finds out that she's seeing Jay (Beau Knapp), a lanky lowlife several years her senior, she tries to intervene, but the bitter, defiant Shelby isn't having it.

As Bell catches up with the former robbery ring members, she finds that none of them are doing particularly well. This isn't a film in which crime pays, not even for Bradley Whitford's Get Out-adjacent McMansion dweller, but nor does Kusama present Bell as heroic. She's a dogged detective and, like most of the director's protagonists, she knows how to defend herself, but she's otherwise a surly mess, and unlike Lee Israel, the surly mess played by Melissa McCarthy in Can You Ever Forgive Me?, she isn't the least bit funny (not, for that matter, is anyone else in the film). Kusama presents the Los Angeles Bell inhabits as similarly un-glamorous. This is the rundown, pitiless city of Jacques Demy's Model Shop or Sean Baker's Tangerine.

And then Bell goes rogue. She's already told her partner to let her handle things herself, after which she takes a hostage (Orphan Black's Tatiana Maslany) and cuts off all communications with the LAPD (as embodied by Toby Huss). If it isn't clear from the start, it's clear by the end: this is a woman who doesn't think she has anything left to lose, so she sets out to solve the crime her own way, thus "fixing" the past as much as anyone can. I'm pretty sure Janis Joplin wrote a song about that kinda worldview.

Kidman is adept at capturing Bell during two very different stages of her life, though it's always a risk to play a character so closed off from the world, especially when she's surrounded by others who are equally off-putting, but the script from The Invitation's Phil Hay and Matt Manfredi allows Bell's façade to develop just enough cracks to let a little vulnerability shine through. Although Kusama probably didn't consult Lynne Ramsay while working on her film, Destroyer almost feels like a companion to You Were Never Really Here with Kidman playing a female version of Joaquin Phoenix's brutal, but not entirely dehumanized hitman.

“I'm not good," Bell admits at her most vulnerable, except that it isn't true, and the most tragic thing about her isn't who she is and what she's done--and she's done some pretty bad things--but that she can't see that. 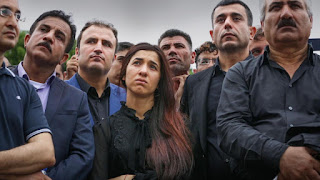 Alexandria Bombach doesn't build her documentary around a person with a particular job, but rather a person with a particular request. That's how subject Nadia Murad, the soft-spoken 23-year-old at its center, describes herself to the filmmaker. Through public appearances, she seeks assistance on behalf of the Yazidis (a non-Muslim minority), who suffered genocide at the hands of ISIS or Daesh in Northern Iraq in 2014.

Nadia's highest profile appearance takes place in 2015 when she speaks in front of the UN Security Council. Though the UN's Simone Monasebian encourages her to describe herself as an activist, Nadia sees herself as a refugee. Simone doesn't understand why she can’t be both, but Nadia doesn't look at the situation through the same lens. When a Canadian radio host asks about her life before ISIS, she mentions school and farming. When ISIS came to her village, they killed most of the men and all of the older women. They raped younger women, like Nadia, repeatedly. It's difficult to listen to her detail such atrocities, but it must be worse to relive them. 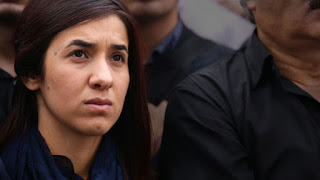 Nadia is a slight figure with long, dark hair, who once dreamed of opening a beauty salon. She has the calm, thoughtful countenance of Charlotte Gainsbourg, circa Jane Eyre. When she smiles, which isn't often, she puts her entire face into it. She's close to Murad Ismael, the 30-year-old executive director of Yazda, who has become a sort of surrogate brother (he also serves as her translator). If she cries on occasion, she spends more time comforting the Yazidis she meets at protest marches and in refugee camps. It means everything to them that she has become their face to the world.

From Canada, Nadia travels to Greece and then to New York where the UN appoints her Goodwill Ambassador for Human Trafficking (human rights attorney Amal Clooney accompanies her on the trip). As the end credits indicate, Nadia has continued to advocate for the Yazidi people ever since.

If she didn't set out to become an activist, she has proven to be a very effective one. As a filmmaker, Bombach (Frame by Frame) treats her with respect, but stops short of full-fledged worship. Nadia is still a human being, albeit one with more passion and poise than most.

If there's a subtext to Bombach's film it's that even well meaning people don't always know how to respond to someone like Nadia. Politicians and journalists come across as concerned in a way that seems more awkward than insincere. They can't decide whether to treat her like a delicate flower or a grizzled warrior, and her reserved manner throws them off. It's not that she's cold so much as self-contained, possibly why she never opens up in the film as much as she could have. It feels like she's holding some-
thing back, but maybe that's the only way to get from day to day, dredging up terrible memories to discomforted people for the greater good.

Endnote: On Her Shoulders plays the Northwest Film Forum (1515 12th Avenue) through Thursday, January 10. Check the website for times.
Posted by kathy fennessy at 12:49 AM No comments: