I Turn My Camera On: Part Two

A Chat with Tia Lessin (click here for part one)

Does Michael Moore miss you? I assume you weren't involved with Sicko.

We were not involved with Sicko, although I was the producer of the segment
on The Awful Truth that was the [indistinguishable] funeral that led to that. And
in fact, many years ago, we filmed some of Sicko-when we were first filming-here
in Seattle. Michael came to Seattle in-what was it-1999, when the WTO protests
were happening, so we filmed some here. You know, as much as I wanted to, Carl [Deal] and I had started filming this story, and it demanded our full attention.

It is hard, but what a gift it has been to kind of learn from the master-or one
of the masters. It was Michael Moore, but also Charles Guggenheim was one of
the first filmmakers I started working with, way back when he was a more tradi-
tional historical documentary filmmaker that garnered like nine Academy Award nominations in his time and three Academy Awards. He was a master I worked
with; also Arthur Dong, a documentary filmmaker based in Los Angeles.
[Lessin is close; according to AMPAS, Guggenheim is "the most
honored documentary filmmaker in Academy history, having
received 12 Oscar nominations and four Academy Awards."]
I really want to see his new film.
[Dong's latest, self-released effort is Hollywood Chinese.]
It's really good.
I've seen his two previous ones. I'm very interested in the subject
matter. He has a knack for picking really interesting subjects.
It's really well done; really funny and shocking. What's exciting about Ar-
thur is that he can tackle any genre, whether it's historical,AePor real cinema-
critiquing. I worked on a project with him a few years ago, so I feel like I've
had good opportunity to see different masters at work. There's nothing
like learning how to think outside the box. Michael is masterful at that.
And he's influenced a lot of people.
Absolutely.
I saw in your credits that you line produced Don't-I mean, No Direction Home. Sorry, I wanted to say Don't Look Back. Did you have any contact with Martin Scorsese?
We worked with a team and, yeah, [D.A.] Pennebaker's outtakes are in there, so,AeP
Even in the case of I'm Not There, I'm tempted to say Don't Look Back.
We were influenced by some of that. He [Scorsese] had this extraordinary footage
of Bob Dylan that he wove throughout the film, and it certainly conveys,AeP Marty made the decision to spread it through the film for a lot of reasons, and then it formed a flashback. In some ways we did that with Kimberly's footage [in Trouble the Water], and I was thinking the other day that we unconsciously imitated that. We had a challenge, because we only used about 15 minutes of her footage, and we were struggling with what to do with the spine of our film. We used it similarly in flashback form, and I found that, even though there was only 15 minutes that we worked with, there was so much she could have filmed, but her battery died. I would love to say that I had something to do with the creative work in Scorsese's film, but I really didn't. I really just came on to help them in the last year of their production.
That's a great thing to be involved with.
Yeah, it was. Particularly if you're a Bob Dylan fan.
Click here for part three

On 11/17, Trouble the Water was shortlisted for an Academy Award nomination. There are no more Seattle dates, but further showings are planned for Olympia,
WA, Anchorage, AK, and San Francisco, CA, among other cities. For screening in-
formation, please click here. Images from W Magazine, Film Journal, and The Academy of Motion Picture Arts and Sciences (AMPAS); Guggenheim photograph
by Steve Barrett. His son, Davis Guggenheim, followed in his father's formidable footsteps when he won the Best Documentary Oscar for 2006's An Inconvenient Truth. 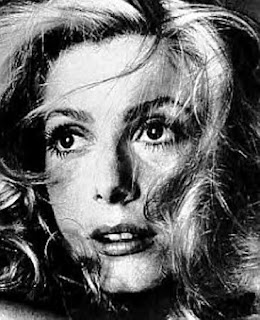 I like French writer/director Arnaud Desplechin quite a bit, especially the epic My Sex Life, or How I Got Into an Argument, but Catherine Deneuve is, for me, something else altogether. I love Catherine Deneuve.

I don't want to say she's my favorite actress, however, because that implies she's superior to other favored screen sirens, like Julie Christie and Barbara Stanwyck.
All three have something special to offer, but she's a contender for the top spot.

In honor of Desplechin's A Christmas Tale, in which she co-stars with Mathieu Amalric, Melvil Poupard, Emanuelle Devos (the director's ex), and Deneuve's daughter, Chiara Mastroianni, the current issue of Film Comment showcases a lengthy piece in which Desplechin interviews Deneuve, who previously appeared in Kings and Queen with much the same cast.

It's one of the best interviews I've ever read; arguably, the best of the year.
Click here to give it a whirl. In short: a full-course meal for the Francophile.

A Christmas Tale opens at Seattle's Seven Gables on Fri., 11/21. Interestingly,
my book club has been reading Jonathan Franzen's The Corrections, which centers
around a Christmas get-together and features one of the most dysfunctional fam-
ilies to come down the literary pike. It's a gross over-simplification, since Despech-
in's multi-layered movies tend to resist easy categorization, but let's just say that
A Christmas Tale is the French cinematic equivalent. Except it's even funnier.

While I'm at it, the new issue of Vanity Fair pays tribute to Deneuve
through the photographs of a strangely-elongated Kate Winslet, who
recreates a few of Deneuve's most iconic poses. I love Winslet, too,
but see no need to Photoshop her figure into Barbie Doll proportions.
Images from For When I Feel Like Sharing, Moving Image Source
(IFC and Why Not Productions), and Vanity Fair (Steven Meisel).
Posted by kathy fennessy at 7:46 AM 2 comments: