Sherlock Holmes Is a Pimp 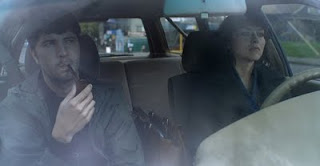 Until he finds a job, he comes and goes as he pleases, but she follows
a more set schedule. In the opening sequence, though, Doug does con-
vince her to leave early one day for a trip to atmospheric Cannon Beach.
This sets the scene for their relationship, as well as the entire film. By
the end, these virtual strangers will have reestablished old family ties.

Not long afterward, Doug finds work at an ice factory, telling the man-
ager that he's undecided about finishing his degree. He works nights with
Carlos (Raúl Castillo, a sparky presence), a part-time disc jockey. When
Carlos asks about his area of expertise, Doug explains, "I don't really
want to be a CSI-type detective. I want to be more like Sherlock Hol-
mes." He proceeds to turn Carlos on to the Sir Conan Doyle series.

Then, Doug's ex-girlfriend, Rachel (Robyn Rikoon), who says she's
been working in a Chicago law office, drops by for a visit while in
town for training. At their first meeting, she seems a little out
of sorts, but the four go on to form a comfortable social unit.

Along the way, Carlos invites Rachel to join him for a Star Trek
Convention, since she's the only one who expresses any interest--
suffice to say, he's a man of surprises--but when he subsequent-
ly invites her to check out one of his DJ nights, she never shows.

At first, Doug doubts that anything is amiss, even though Rachel left
her motel lights on and stopped answering the phone, but Carlos con-
vinces him otherwise. Previously, he had laughed at the Holmes-Watson dynamic--"Elementary, my dear Watson," he sniffed--yet he comes to ful-
fill that function once Doug gets on board, which makes Gail a Hermione
to their Harry-Ron combo, if you'll pardon the Harry Potter reference.

Unlike the BBC's recent Sherlock with Benedict Cumberbatch as a
contemporary version of Doyle's detective--to Martin Freeman's Wat-
son--Cold Weather doesn't draw from the same source, but Katz nev-
er shies away from the inspiration. Despite the use of cell phones and computers, Doug's approach is essentially low-tech, which is to say, an-
ti-CSI. Instead, he relies on library research, stake-outs, and disguises.

As in Dance Party, USA and Quiet City, Katz, by way of DP Andrew Reed,
chooses his compositions with care. They don't feel studied, but they al-
ways look just right, which is important, since he favors static shots, an
unhurried pace, and naturalistic performances. Like the Chris Doyle-shot Paranoid Park, Portland comes alive as wet, green, and mysterious. Be-
cause Katz tends to works with inexperienced or non-actors, there isn't
a lot of technique on display, but the characters register as believable.

That said, if you're expecting a big reveal or a fast-paced wrap-up,
you may leave disappointed. Though the ending took me by surprise--
I was expecting an epilogue--it makes perfect sense when you think a-
bout it: Doug proves himself the detective he was always meant to be. 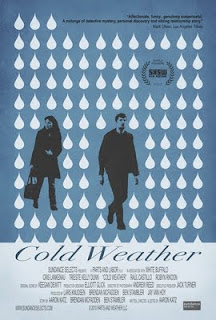 Cold Weather plays the
Northwest Film Forum March
11-17 at 7 and 9:15pm. The
NWFF is located at 1515 12th
Ave. between Pike and Pine
on Capitol Hill. For more in-
formation, please click here. Image from IONCINEMA/IFC. 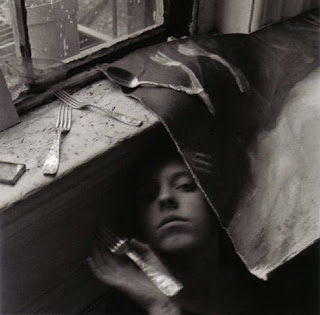 If Francesca
Woodman hadn't
killed herself, it's
doubtful C. Scott
Willis's provoca-
tive film would
exist. There are,
after all, other
talented 22-
year-old pho-
tographers who
haven't merited their own documentaries. Similarly, photographer-turned-filmmaker Anton Corbijn's Control wouldn't exist if Ian Curtis hadn't hung himself, yet Joy Division was an undeniably important band whose legacy has long outlived its lead singer.

On the contrary, I had never even heard of Francesca until I read about The
Woodmans in The New York Times. From Stephen Holden's review, I also learned
about her parents, artists George and Betty Woodman, who have been married for
over 50 years. It soon becomes apparent that the film wouldn't exist without them
either, since this is a group portrait (as if the title didn't already give that away).

The story begins in Boulder, where George taught at the University of Colorado (as
a child, I lived in CU campus housing while my stepfather was getting his law degree).
Tellingly, he describes children Francesca and Charlie, a video artist, as "these sort
of gift calamities." George and Betty continued to produce art while they were growing
up, and earned enough to buy a home in Italy, where Francesca started sketching.

If she inherited their interest in art, her parents worry that they spent more time
creating than parenting. Says Charlie about his mother, who was raised in a Jewish
family, "She doesn't really practice a religion. Art was sort of the religion for her."

George says his daughter picked up photography in boarding school (Phillips Exet-
er Academy, according to her ID card) and studied the subject at the Rhode Island
School of Design. By 1979, all three artists were living and working in New York.

Willis weaves Francesca's photographs and video pieces throughout the narrative.
In most, she appears nude, indicating a certain comfort with her own sexuality and
Pre-Raphaelite appearance. In light of her suicide, however, which looms unavoid-
ably, there may have been more to it than that (other female and male subjects ap-
pear without clothes). Also, in some images, she looks like a blur or a ghost. If she
were still alive, that might not seem quite so eerie, but that's what happens when
someone takes their own life: every move can look like a rehearsal for death.

To add perspective, Willis interviews classmates, as well as neighbor Patricia Saw-
in, who found Francesca's photos "a little scary," and friend Edwin Frank (New York
Review of Books), who acknowledges a crush. In addition, Willis adds words (via on-
screen text) from her journal to bring Francesca's voice into play. That she kept one
at all invites speculation as to whether she knew it would one day become public.

An unabashed fan, George says Francesca's work made his look "stupid," but who's
to say it wasn't also morbid and self-indulgent? I find it intriguing, but it makes me
feel like a voyeur. And her parents admit that her "tragic story" adds to the allure.

Until she moved to New York, though, her story really wasn't tragic. Unfortunately,
she expected instant success. The problem isn't that she over-estimated her worth,
but that her expectations weren't realistic. And that's the point at which things start-
ed to fall apart, despite encouragement from friends, relatives, and colleagues.

If I sound cynical, it's because I believe Francesca was an artist in the truest sense,
with all the single-mindedness and arrogance that implies. Everyone thought she
was special--herself above all. Even her father uses the term "self-preoccupation."

Granted, she wasn't the first photographer to make herself her primary subject, but
you could hardly compare her to someone like Cindy Sherman, who seems like an
actress in comparison, since she takes on a different persona for most every print.

Francesa Woodman died believing she was unique, and she was. Her work will live on,
and she'll loom larger in history than her parents, despite their enduring devotion to
their respective crafts. It doesn't seem fair. But I also prefer her work to theirs. 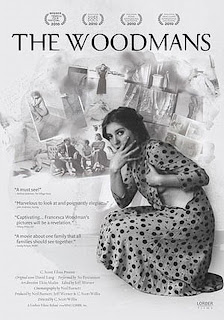 The Woodmans concludes tonight,
3/3, at the Northwest Film Forum.
The NWFF is located at 1515 12th
Ave. between Pike and Pine. For
more information, please click
here. Images from Lorber Films.