Film noir is a fluid genre, unlike the Western or the science fiction film, not everyone agrees on what a film noir is. Traditionally, noir has been defined as an exclusively American crime genre with certain stylistic and story elements: black and white high contrast cinematography, the femme fatale and the protagonist led to an inevitable doom.  However, many include Technicolor films like Leave Her to Heaven in the noir canon, and there has been a critical awakening to the fact that countries other the U.S. in the 40s and 50s produced film noirs. Similarly, noirs antecedents have been posited and reevaluated. Typically noir’s roots are traced back to the German Expressionism, the Hollywood gangster films of the 30s and the Hardboiled school of pulp fiction. The Film Noir Foundation has been trying to explore the question of what noir is with the international bent of this year’s NOIRCITY film festivals and expanded editorial outlook of its NOIR CITY e-magazine which includes a regular feature entitled “Silent Noir”.


The FNF will be co-presenting two silent era proto-noirs at the San Francisco Silent Film Festival, running May 29–June 1 at the historic Castro Theatre. Renowned British director Anthony Asquith's second feature Underground (1928) is a working-class love story and thriller set in and around the London Underground (subway system). The romantic triangle pits nice-guy Brian Aherne against sinister Cyril McLaglen for the affections of beautiful shopgirl Elissa Landi. The film's climax is a chase at a power station that rivals Hitchcock's chase scene at the British Museum in Blackmail. The incomparable Stephen Horne will accompany the film on piano. Horne is the house accompanist for the British Film Institute and has previously accompanied Asquith's A Cottage on Dartmoor for the SFSFF, as well as recording his own score for the BFI's DVD and Blu-ray release of the silent thriller. Underground will screen on Saturday, May 31 at 4:30PM.

The name Yasujiro Ozu brings to mind the graceful, self-contained family drama or comedy depicting everyday life in Japan. However, Ozu worked in a variety of genres early in his career as a studio director. In his 1933 gangster film Dragnet Girl (Hijosen no onna), a tough gangster (Joji Oka) finds himself embroiled in an unexpected love triangle with an innocent shop girl (Sumiko Mizukubo) and his own tough as nails moll (Kinuyo Tanaka) that causes him to reevaluate his criminal lifestyle. FNF president Eddie Muller will introduce this program, playing at noon on Sunday, June 1. The versatile Guenter Buchwald will accompany the film on piano. Buchwald is the director of the Silent Movie Music Company and conducts the Freiburg Filmharmonic Orchestra, which he founded in 1992.

Also for the lovers of ‘the dark side of the screen’, the Goethe-Institut/Berlin & Beyond will co-present Leo Mittler's Harbor Drift (1929), an eloquent German film that prefigures film noir in its depiction of fated souls, with exquisite camerawork by Friedl Behn-Grund of the shadowy harbor, bridges, canals and alleyways of Hamburg. The German title Jenseits der Strasse’s subtitle: Eine Tragödie des Alltags—a tragedy of everyday life—is an apt description of Germany’s unemployment and destitution as personified in the film by an old beggar (Paul Rehkopf), a jobless young man (Fritz Genschow), and a prostitute (Lissy Arna). The film plays Sunday, June 1 at 7:00PM. Stephen Horne will accompany the film on piano with Frank Bockius joining him on percussion. Bockius’ musical background includes founding both a percussionist band and a jazz quintet. He also performs with the Silent Movie Music Company.

To buy tickets or find out more about the festival, visit SilentFilm.org
Posted by Anne M. Hockens at 12:15 PM No comments:

Dreaming of a Noir World 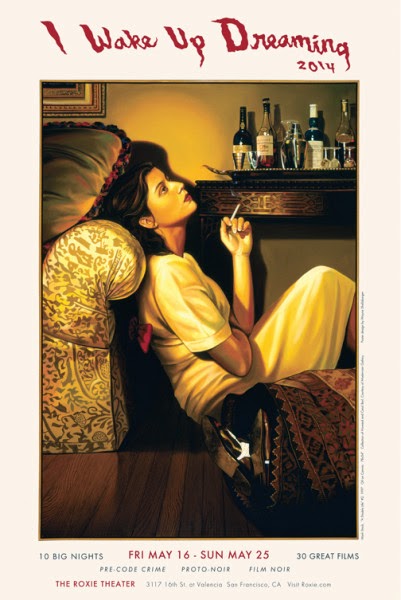 The Warner Archive has joined forces with programmer Elliot Lavine to present this year's I Wake Up Dreaming film noir festival. The ten day festival runs the gamut from Pre-Code crime classics like Barbara Stanwyck's outing in the women in prison genre, Ladies They Talk About (1933) to late era noirs such as Brainstorm (1965) featuring Jeffery Hunter as a murderer who fakes insanity in an attempt to beat the justice system with disastrous results. There will be plenty of classic era noirs for the purists too, including the one often considered the first true film noir, The Stranger on the Third Floor (1940) featuring a frightening but humane performance by film noir icon Peter Lorre.

Other highlights include a double bill of 1947 noirs featuring outstanding performances by Ann Sheridan, Nora Prentiss and The Unfaithful and a pair of Fritz Lang helmed films starring Dana Andrews from 1956, the all-star newspaper noir While the City Sleeps and the suspenseful courtroom noir Beyond a Shadow of a Doubt. Both sets of double features prove the depth of their respective stars, as well as the willingness of Hollywood to take on controversial topics in a sensitive manner: adultery in Nora and Unfaithful, journalistic ethics in City, and the death penalty in Beyond.

All 30 selections in this year's festival hail from the Warner Archive, but will also include films produced by RKO and MGM now owned by Warners. In a significant change for the festival, all the films will be presented digitally.  In previous years, rarer films were often presented in 16mm prints in varying condition supplied from private collectors. The Roxie's digital projection and the digital source materials will provide a consistent picture and sound quality to this year's screenings.

For the complete schedule of films and ticket information, visit the Roxie's official website.
Posted by Anne M. Hockens at 1:29 PM No comments: