Putting Out Fire with Gasoline 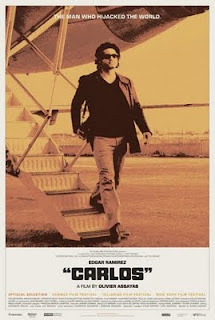 Fighting capitalism with guerilla means is romantic, but doomed to failure.

Olivier Assayas transcended his status as a French director with international productions like Irma Vep (with Hong Kong's Maggie Cheung, his ex-wife), demonlover (Denmark's Connie Nielsen), and Boarding Gate (Italy's Asia Argento). The films combine disparate languages and locations, but remain French simply because a Frenchman made them--plus, France plays a role in this protagonist's fate.

With his three-part take on Ilich Ramírez Sánchez, AKA Carlos (Édgar Ramírez, The Bourne Supremacy, Ché), Assayas casts a Venezuelan actor to play a Russian-educated Venezuelan terrorist (who prefers militaristic terms like "soldier" and "commando").

Throughout the film, Carlos shuttles between Paris, London, Beirut, The Hague, Vi-
enna, Damascus, Budapest, Tripoli, and other cities in service of the FPLP (Popular Front for the Liberation of Palestine), East Germany's Stasi, the Syrian Air Force, and the Libyan government. In the process, he collaborates with the Japanese Red Army and German Revolutionary Cells, eliciting praise from Iraqi General Saddam Hussein.

In his line of work, it pays to be multilingual, but it also suggests that Carlos, master
of five tongues, has no real home (Assayas leaves his background a blur). As Ramír-
ez plays him, he's passionate, narcissistic, and sexually attracted to ammunition, tel-
ling a girlfriend, "Weapons are an extension of my body." (In Vogue, John Powers de-
scribes Ramírez as "carnal.") Carlos bombs and shoots up banks, airplanes, drug-
stores, oil conferences--whatever it takes to halt the Mideast Peace process.

During the raid on 1975's OPEC Conference, which takes up the bulk of part two, As-
sayas has his antihero take a quick snort of cocaine in the midst of a hijacking. It's
a throwaway moment, but it's also a telling move for an avowed anti-imperialist.

Granted, it was probably easy for him to acquire and provides a boost of energy to
a tired terrorist, but it's also the drug of choice for rock stars and stock traders. For
my money, this is the point where Carlos starts to lose the plot as the dedicated
Marxist learns to love--and expect--the cash-stuffed briefcases his efforts attract.

An opening credit makes it clear that Assayas wasn't aiming for documentary realism,
i.e., "The film must be viewed as fiction," but the moments where people sit in
rooms, talking and smoking, combined with an absence of CGI keeps a Hollywood feel at bay, even as Carlos becomes an international celebrity. There's action, but it isn't an action movie or a thriller, even though I never knew where things were going, other than that Carlos wouldn't meet his maker (he remains incarcerated in France).

If it lacks the pop-cult buzz of Mesrine or The Baader Meinhof Complex, Carlos doesn't
lose itself in strategy like Ché, which also arrived in thirds. Furthermore, Assayas es-

chews a traditional score, but keeps the energy up with post-punk tracks that set the mood rather than reflect the era. It's anachronistic, for instance, that "Dreams Never End" represents Carlos in the first part...though his dreams do eventually end.

If Eno in the 1970s sets the tone for Clean, Wire in the '70s and '80s ("Dot Dash," "Drill," etc.) serves as the de facto pulse for the subsequent sections, along with songs from the Feelies, A Certain Ratio, Material, Fripp & Eno, and the Dead Boys.

In the end, Carlos gives Ramírez the role of a lifetime (I've admired his work since
the underrated Domino). It's hard to imagine anyone more perfect, and the actor doesn't put one foot wrong, though his co-stars, who are mostly very good, over-
act at times. More importantly, though, it's the apotheosis of Assayas's globaliza-
tion project, a theme running through his work at least since Irma Vep (a similar facility with languages in Clean brought Cheung a best actress award at Cannes).

While demonlover and Boarding Gate were chilly, Carlos, like Cold Water and Summer Hours--otherwise very different films--gets the balance right. You may not like this whoring, girlfriend-stealing, cop-killing autodidact, but he's too human to hate.

Ultimately I realized that the disconnected images I had of Carlos had an in-
teresting, even fascinating connection that somehow paralleled the evolution of
Western leftism in those years. So I felt it was the fate of one man and, in a
certain way, the story of one generation, plus a meditation on time, history,
fate and issues more universal than the specific history of Carlos.
-- Olivier Assays to The New York Times

Carlos continues at the Northwest Film Forum through 11/7 in three parts, beginning at 5:30pm. The NWFF is located at 1515 12th Ave. between Pike and Pine. For more information, please click here or call 206-829-7863. Images from OutNow!

Posted by kathy fennessy at 5:00 PM No comments: