The sharp-dressed men in Franco Rosso's feature-film debut, resplendent in snappy headgear and wool coats with a hint of swagger, spend much of their time moving sound systems from one end of South London to the other. Primarily of Jamaican descent, they're part of a scene that revolves around gambling, ganja, and reggae, heavy on the dub. The patois is so thick that the (helpfully subtitled) dialogue plays more like music than talk.

The loose-limbed plot centers on Blue (Aswad front man Brinsley Forde, wiry and intense) and Beefy (Trevor Laird, Quadrophenia). When they find a record they like, they bring it to their garage hangout, and skank with abandon. One night, they're having a bit too much fun when a white neighbor, a wan figure in a housecoat, bangs on their door, and hurls epithets in their direction: "coons," "jungle bunnies," "mango munchers"--you name it. London was lovely, she tells them, until they arrived. She might as well have been wearing a MAGA hat. "This is my fucking country," Beefy seethes, "and it's never been fucking lovely." He's right, of course.

If the acting can be stiff at times, Laird's anger is so palpable that it's hard to imagine the actor didn't experience similar moments in his own life, particularly when Beefy pulls out a knife and attempts to charge after an especially hateful trio of bullies. His friends have to use all of their strength to hold him back, cautioning that the price he'll pay for getting his revenge won't be worth it. They're right, too.

The pattern repeats itself whenever the black men enter majority-white spaces, exemplified by a kinetic chase through dark, rain-soaked streets (the Italian-born director has a knack for positioning bodies in space).

If the film is devoid of sexual imagery, there's profanity, mild (ganja-specific) drug use, and non-explicit--but potentially deadly--violence. Nonetheless, the British Film Board slapped the dreaded X rating on Babylon, diminishing its exposure in the United Kingdom and ensuring that it wouldn't open in the United States until almost four decades later.

This 2019 release feels uncomfortably apt. Between Donald Trump in the US and Theresa May in the UK, black people are still easy targets for bitter, resentful whites who vote against their own best interests, fail to learn from their mistakes, and go out of their way to inflict their misery on everyone they can, but especially those more vulnerable than themselves. 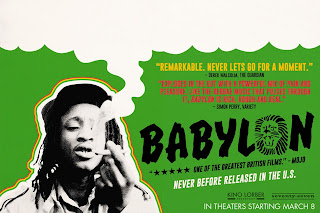 Then, just when it seems as if the dis-
tinction be-
tween the two camps couldn't be more stark, Blue watches in horror as his friends partic-
ipate in an act of homophobic violence. They want money, a white man has it, and they'll do whatever it takes to get it, even using his sexual orientation against him. "Money's money, innit, mate," his friend reasons. Moments later, Blue shows that he's just as capable of the same twisted logic when he threatens his lonely, neglected girlfriend.

By the end, the crew even doubts the loyalty of Ronnie (Karl Howman, Brush Strokes, Eastenders), their sole white member. Maybe he's different than the rest, maybe he isn't, but how can they be sure? If the film is refreshingly free of firearms, the knife in the first act becomes the Chekhov's Gun of the third when the anger that's been steadily accumulating culminates in the sort of vengeance the group had previously prevented.

Throughout, composer Denis Bovell's dense waves of sound saturate the scenario as surely as Tangerine Dream's pervasive score for Michael Mann's Thief (other artists on the soundtrack include I-Roy and Yabby U).

Combined with the rich, velvety imagery of Oscar-winning cinematog-
rapher Chris Menges (Kes, Local Hero, The Good Thief), who oversaw the new restoration, South London comes across as beautiful and foreboding, suspended somewhere between romantic dream and treacherous night-
mare. You may want to visit, but you certainly wouldn't want live there.

Unfortunately, many do live in such places, and escape routes for the poor and powerless are no more readily available now than they were then. Babylon is hardly a feel-good proposition, but it captures the highs--the music, the camaraderie--and lows--the homophobia, the misogyny--of an underrepresented scene with lacerating, you-are-fucking-there precision. 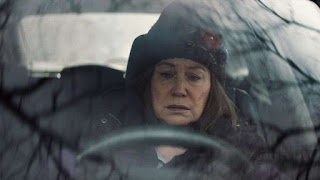 Kent Jones, former film critic and director of the New York Film Festival, introduces himself as a filmmaker who isn’t obsessed with style, at least not in the ostentatious way of other first-time fiction filmmakers eager to show off their skills (his two previous features were documentaries about Elia Kazan and Hitchcock / Truffaut). This Martin Scorsese-produced film, instead, has a plainspoken, slightly hypnotic feel, which fits his seemingly quotidian subject matter.

Mary Kay Place plays Diane, a tireless widow who spends most of the movie looking after other people in her Western Massachusetts hometown. The hypnotic feel comes from the fact that she has to drive everywhere, and Jones uses the driving sequences as a sort of rhythmic, repetitive device.

Though it’s often said that women of a certain age don’t get many opportunities to play leading roles, that isn’t necessarily true. It’s more that casting directors don’t often look beyond the usual suspects and the films with unknowns, like Sean Baker's Starlet, don't attract as much attention.

Place may not have the name recognition of Meryl Streep or Kathy Bates, but she’s hardly an unknown, so it still seems surprising that she hasn’t top-lined more films, particularly since she’s often garnered as much acclaim as--if not more than--the actors with whom she’s worked since the early-1970s.

In Jones’s film, which takes place in the dead of winter, she never stops moving. Diane volunteers at a soup kitchen, visits her terminally ill cousin Donna (a terrific Dierdre O’Connell), and checks in on her troubled son Brian (Jake Lacy, playing against his sweet, supportive Obvious Child type). Brian swears that he has bronchitis, but Diane’s quite certain he’s using again.

Though she lives by herself, she’s hardly alone. Some of the people with whom she can share her troubles include Bobbie (Andrea Martin in fine form) and Donna’s mother, Mary (Estelle Parsons, as impish as ever).

One night, the power goes off at the soup kitchen, the staff lights candles, and everyone eats their dinner bathed in the golden glow. Jones may not be obsessed with style, but that doesn't mean he eschews it as this sequence plays like something from out of a Renaissance painting. And when Diane visits Brian while he’s clearly on the nod, disorienting music and wobbly visuals converge to slow down time. There are also several lovely dissolves, like a fade out from a headlight-lit road to the inviting interior of a diner.

Once Brian disappears, Diane starts to disintegrate. She lashes out at a volunteer, argues with Donna, drinks too much, and breaks down in tears. Then, when Brian comes back, he's turned into a Bible thumper. It's like he's a pod person. Meanwhile, friends and relatives are dying around her.

Diane goes on, but there's less to do, fewer people to see. She starts writing in a journal. Or maybe she always has, but it assumes greater importance as the perimeters of her life shrink. Eventually, it becomes so small that reality and fantasy bleed into each other. I wasn't always sure what was real and what was not, but I guess that's what it's like when you do more living inside of your head than out in the world. The past comes to the fore as the present recedes.

I found my connection to Diane slipping away as the scenario segued from realism to impressionism. If was as if the ghost in the machine was Bergman, specifically the Bergman of Wild Stawberries and Cries and Whispers; the death, the isolation, the visions. I'm usually on board with that sort of thing, but two modes don't fit together as well as they could.

Fortunately, Place weathers the changes like a champ. She never asks the audience to like her; Diane isn't perfect, and she knows it. She isn't explicitly trying to make up for misdeeds, but she is trying to be a good person. If she has a failing, it's that she doesn’t know how to be happy.

There are momentary glimpses of joy in a card game with her cousin and a sloshed singalong to a jukebox, but it never seems to last. Only her son is left behind to remember her kindness, and Jones is enough of a realist to suggest that Brian may never understand how lucky he was. But we know.