Fog of War: Countdown & the Story

"How I Learned to Start Worrying and Fear the Bomb."
-- Peter Bradshaw, The Guardian

With a rigorous eye, Blindsight's Lucy Walker examines the arms race from the inception of the atomic bomb to the present, building her three-part structure around a speech from President Kennedy, in which he warned of "accident, miscalculation, and madness."

If Kennedy serves as the film's conscience, physicist Robert Oppenheimer, who over-
saw the Manhattan Project--only to regret the death and destruction it would engen-
der--serves as its heart (ghostly images of the pale-eyed scientist are almost as eer-
ie as his prophetic words). Even Oppenheimer, though, couldn't have predicted the ready availability of highly enriched uranium in the years after the Cold War, one of Walker's more chilling revelations. Aside from the deadly explosions in Oklahoma City, Madrid, and other urban centers, she looks at several near misses. As Kennedy concluded, "The weapons of war must be abolished before they abolish us," and she ends on a note of guarded optimism by speaking with F.W. de Klerk, who dismantl-
ed South Africa's nuclear infrastructure during his administration. Most of her oth-
er speakers agree: it's the right thing to do. Like Dr. Strangelove and Fog of War, Countdown to Zero marks an essential addition to the ranks of atomic cinema.

In My Kid Could Paint That, director Amir Bar-Lev took on an art world mystery. With The Tillman Story, one of the year's best documentaries, he takes on a military mystery. When NFL player Pat Tillman and his brother, Kevin, signed up to serve
in Afghanistan, no one knew exactly why, but the move made national headlines
and, against the deeply private young man's wishes, he became a symbol of pa-
triotism in action. Then, on his second tour of duty, a bullet took Tillman's life. President Bush stated that 9/11 had galvanized the 27-year-old, though Tillman never said any such thing, while the Army claimed he died defending his fellow Rangers (they also acted against his wishes by staging a military funeral). Devas-
tated, his parents knew the story didn't add up, so they pushed for the truth, despite massive resistance, and the Army finally admitted that their son had been the vic-
tim of friendly fire or "fratricide," but resisted all attempts to find out exactly what
happened. Consequently, it's a mystery that Bar-Lev, who edits his material togeth-
er like a maestro, can't completely solve, but he sheds light on a shameful episode
in American history while simultaneously paying tribute to a remarkable family.

Also, in case you missed the SIFF screenings, Seven Gables theaters will be showing the following well regarded films after the fest: Joan Rivers - A Piece of Work (6/18); Holy Rollers, I Am Love, and Winter's Bone (6/25); Cyrus (7/2); and Farewell (8/6).

Endnote: As always, dates and times are subject to change. Please visit the
official website for more information. Images from MUBI.com and indieWIRE.

Posted by kathy fennessy at 2:00 PM No comments:

Family Ties: The Boy & The Concert 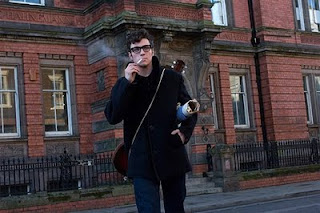 In "Mother," John Lennon sang, "You had me, but I never had you." Fine artist-turned-filmmaker Sam Taylor-Wood delves into the story behind those words, starting with a 15-year-old Lennon (Kick-Ass's Aaron Johnson), who lives in Liverpool with his Uncle George (David Threlfall) and Aunt Mimi (Kristin Scott Thomas, all pin-curls and British reserve). George's death spurs Lennon to seek out Julia (Anne-Marie Duff), his birth mother, who turns out to be fun and flirtatious (their scenes together carry a subtle sexual tension).

The mother of two, Julia enjoys reconnecting with her son, even if the man in her life (David Morrissey) doesn't share her enthusiasm. She introduces John to rock & roll and teaches him how to play the banjo, but she also suffers from mood swings. Torn between the mother who raised him and the one who gave him life, John funnels his frustrations into music, forming the Quarrymen, but then he meets Paul McCartney, and revamps the line-up to work in George Harrison and Stu Sutcliffe (whose story fueled Backbeat). If John's relationship with Julia didn't come to a happy end, she would have a profound effect on his life--and inspire this tenderhearted tribute.

A cynic might call The Concert sentimental, a curmudgeon might call it shame-
less, but only a stone could fail to feel something by this crowd-pleasing comedy's emotional conclusion. It begins in Russia with former Bolshoi conductor Andreï (Alexei Guskov). In 1981, when Brezhnev ordered him to fire his Jewish players, he refused, lost his job, turned to the bottle, and now works as a janitor. His best friend, Sacha (Dmitri Nazaro), a cello player, has remained loyal to the Maestro ever since.

When Andrei intercepts a fax meant for the head of the orchestra, Sacha goes along with his scheme to get the gang back together, pass themselves off as the Bolshoi, travel to Paris, and perform with Anne-Marie (Mélanie Laurent, Inglourious Basterds). Andrei just happens to have a connection to her that the violinist's manager, Guylène (Miou-Miou), has kept secret for 29 years. After a series of slapstick misadventures, music and secrets come tumbling out. Radu Mihaileanu keeps things humming a-
long--with an assist from Tchaikovsky--but offers few real surprises, so it's fortu-
nate that his leads give such convincing performances, since most of the other
characters (the unctuous official, the crafty gypsy) cross the line into caricature.

Endnote: As always, dates and times are subject to change. Please visit the official website for more information. Images from Creative Boom and Art Act Magazine.

Posted by kathy fennessy at 4:45 PM No comments: 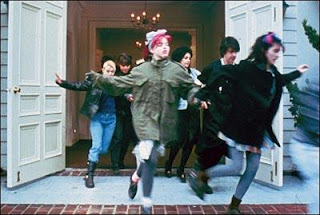 Under the heading "Roger Corman's Cult Classics," Shout! Factory does punk fans a solid with this one-two punch: Penelope Spheeris's Suburbia and Allan Arkush's Rock 'n' Roll High School, both now available with a combination of old and new extras, including trailers for the next two films in the series: Piranha and Death Race 2000.

Spheeris, the director behind 1979's The Decline of Western Civilization (and the producer behind Real Life), opens her film exploitation-style as a suburban mother picks up teenage hitchhiker Sheila (Jennifer Clay, quite good). The next thing the mother knows, a Doberman has her young daughter in its clutches. It's unclear whether Sheila provoked the incident or not. Later, it transpires that wild dogs are roaming the streets of Orange County, and that Sheila, the victim of child abuse, wouldn't hurt a fly.

Presumably, the kids with whom she's about to co-habitate are like those dogs: rootless, hungry, eager to fuck shit up--or at least that's how the outside world sees them. (In her commentary, Spheeris says she took inspiration from the sudden closure of a guard-dog training center.)

After that disturbing prologue, she shifts her focus to the home life of a couple of other unhappy youngsters in the So-Cal suburbs. Deciding that he can't take his booze-sozzled harpy of a mother anymore, Evan (Bill Coyne, one of the cast's few professional actors) runs away, though he'll soon return to collect his younger brother, Ethan (Andrew Pece).

On his first night alone, Evan ends up at a punk show where the discomforting exploits continue as D.I.'s Casey Royer sings, "Richard hung himself!" while Skinner (Timothy O'Brien) rips off a valley girl's dress to the overwhelmingly male crowd's delight. No one steps in to lend her a hand. The bass player for the Red Hot Chili Peppers, then billed as Mike B. the Flea, watches with his pet rat. Oh, and someone doses Evan's beer.

So far, the punk scene seems more creepy than cozy as the kids also take issue with homosexuals and the disabled. Charming. Then bleached blond Jack (Chris Pedersen) spots Evan crashed out in front of the club and lets him sleep in his beat-up car. Stepson of a cop, Jack commiserates. "Parents are so lame," he sighs. The next day he throws a beer bottle at a vehicle, because "I hate buses." Jack, in short, is an idiot, but at least he has a heart, and Evan moves into his roach-infested crash pad. Turns out his roomies, who call themselves The Rejected, are the same creeps who put last night's party girl in her place, but they have more respect for the women--and the one-legged guy--who populate their own tribe.

So, Evan gets a T.R. (for The Rejected) tattoo and a haircut. Just as he's found a new home, a couple of rednecks start taking out the dogs, indicating that the punks may face similar treatment in the days to come. Now Evan's life revolves around TV, Rodney on the ROQ, stealing food from the garages of unsuspecting suburbanites, and defacing property (at least the skinheads in Shane Meadows' This Is England targeted condemned buildings).

If the kids aren't initially sympathetic, Spheeris gives the the blue-collar guys and the cops, notably Jack's stepfather, Officer Rennard (Donald V. Allen), back stories of their own. The former, for instance, have just joined the ranks of the unemployed through factory layoffs. They're angry, too. Consequently, comparisons to Dennis Hopper's Easy Rider don't quite work.

Instead, Suburbia updates earlier entries about teenage misfits kicking against the pricks, like If..., A Clockwork Orange, and Over the Edge. And with their flat, but effective line readings, it comes as little surprise to find that most of the cast didn't go onto acting careers, but they add the verisimilitude for which Spheeris was looking. As she explains, "It was easier to turn a punk rocker into an actor than an actor into a punk rocker."

Her first feature also offers choice quotes. Here's Redneck #1 on the gang, "Mental rejects running wild on our streets!" Here's Skinner to Rennard, "If we didn't have each other, we wouldn't have anything." Then there's this pungent exchange: Redneck #2: "Where's the war?" Skinner: "Up your ass!"

As with Rock 'n' Roll High School and Jonathan Kaplan's Over the Edge, the film ends with a showdown between the outlaws and straight society. I won't say who wins, only that Spheeris captures the feel of an old Western as surely as John Carpenter did in Assault on Precinct 13. Extra features include a photo gallery, three original trailers (two of which refer to the film as Rebel Streets), and two commentary tracks; Spheeris on one and Spheeris, Clay, and mattress king-turned-producer Bert Dragin on the other.