As a gift, Indian and Cowboy decide to build a barbecue pit, but a technical snafu turns an order for 50 bricks into...50 million. The resourceful fellows construct the device and hide the bricks before Horse gets home. A wild party ensues. Then, during the night, their house starts to sink, and eventually collapses. While trying to put it back together, someone keeps stealing the walls. Who would do such a thing?

In attempting to solve the mystery, the trio ends up falling through the Earth's core to the other side, where they land in an Arctic research center shaped like a giant penguin. Along the way, they find the culprits while evading selfish scientists and swordfish-wielding sea creatures (that's to say nothing of the lava pit). Now In-
dian, Cowboy, and Horse must figure out how to get back home with the walls.

Though some observers might describe Indian and Cowboy as stupid or childish, they're more naïve and impetuous than anything else. Further, all of the characters, to quote the press notes, speak "as if they are filled with laughing gas" (and it's even funnier in French). Better yet, Cowboy and Indian are semi-permanently
affixed to display stands, but they still seem to wobble around pretty well.

By the end, the three have recovered the walls and Horse gets back in time for his piano lesson with Miss Longray. To say how would spoil the fun, but I will say that
I particularly liked the way scales are mixed throughout: Indian, Cowboy, and Horse brush their teeth using human-size implements, while Steven starts the day with a towering slice of Nutella toast, even though all four are only a few inches high.

According to indieWIRE, A Town Called Panic is "the first full-length stop-motion animation to screen at Cannes." If the film's figures are cruder than those of Cora-
line or Fantastic Mr. Fox, it's every bit as enjoyable, if far more anarchically silly.

A Town Called Panic continues at the Varsity Theater through Thurs., 1/28. The
Varsity is located at 4329 University Way NE. For more information, please click here
or call 206-781-5755. Poelvoorde, incidentally, probably remains best known in the States for Man Bites Dog. Suffice to say, the feisty farmer he voices here is far less chilling than that film's unrepentant serial killer. Images from Zeitgeist.

A Town Not Called Malice

I can't think about this film without hearing the Jam song "Town Called Malice."
That said, the two have little in common, except that they're both a lot of fun. 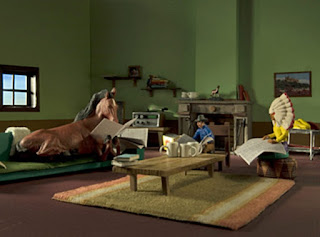 Sitting 'round at home...watching the pictures go.

A Town Called Panic begins and ends with a hand-drawn credit sequence, but most of the movie consists of stop-motion activity. During the first few minutes, images of Gumby and Pokey, Mr. Bill, and Bob the Builder danced through my head, but then I got sucked into the story and most other stop-motion animations faded away.

The feature springs from the 2000 TV series of the same name, which Aardman An-
imations (Wallace & Gromit) released on DVD, and centers around the adventures of Cowboy, Indian, and Horse. They appear to be made out of plastic, although I'd im-
agine it's actually clay, plasticene, or some other sort of malleable substance. If their facial expressions never change, the film itself is in constant motion. The figurines move quickly, but the story is never hard to follow, and there isn't enough dialogue to create subtitle-reading fatigue, though younger viewers may feel differently.

The three friends share a roomy house in the country next to Farmer Steven (Ben-
oît Poelvoorde, Coco before Chanel). If Indian (Bruce Ellison) and Cowboy (Stéphane Aubier) are swinging singles, Horse (Vincent Patar) carries a torch for Madame Long-
ray (Jeanne Balibar, Va Savoir), a sweet-natured music teacher with a long red mane. He's so enamored, in fact, that he decides to take piano lessons. (Because the movie is in French, the trio is actually listed as Indien, Coboy, and Cheval.)

But first there's a birthday to celebrate. And that's when the trouble begins... Note: The links lead to my Amazon, SIFF, Siffblog, and Video Librarian reviews.

* Clooney one-two punch. I liked Men Who Stare at Goats, too. 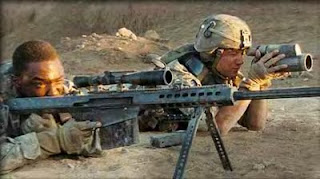 Endnote: Cross-posted at AndMoreAgain and Facebook. Images
from Reel to Reel, Way of the West, Action Movie Reviews, Channel 4,
Minnesota Public Radio (Fox Searchlight Pictures), and Film Forum.
Posted by kathy fennessy at 11:00 AM No comments: