Let Nothing You Dismay 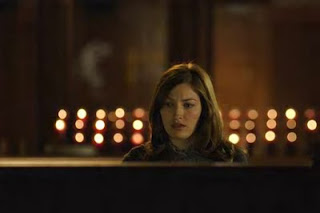 Once upon a time he was a versatile comic presence who moved from sitcoms in
the 1970s (Working Stiffs) to Ron Howard laughers (Night Shift, Gung Ho) in the 19-
80s. He was, in other words, on the same career track as Splash-era Tom Hanks.

Then he turned away from the light towards the darkness of the Caped Crusader (and long before he launched his movie career, he was a Pittsburgh kid serving as a stage hand on Mister Rogers Neighborhood). Whether by choice or by necessity, actor Michael Keaton has kept a lower profile ever since, though he’s done some of his most interesting work—like Jackie Brown and Game 6—in the intervening years.

Now he makes his directorial debut with The Merry Gentleman, which isn’t a topic-
al comedy like Mr. Mom, a Tim Burton bauble like Beetle Juice, or even a suburban chiller like Pacific Heights, but a two-pronged character study shot in shades of noir.

“It’s not uncommon to mistake boredom for hunger.”

The set-up begins in Chicago with a man (Keaton) and woman (Kelly Macdonald), leading separate lives. The woman, who lives in another city with another man (Bob-
by Cannavale) enters the scene with a bruised eye. After the other man leaves for work, she packs up her stuff, catches a plane to Illinois, and starts a new life.

Meanwhile, Keaton’s Frank Logan watches a trio of men leave a corner bar while he swigs what looks like cough syrup. Moments later, he shoots one of them dead.

Then, while planning another hit, he spies Kate Frazier, now working as a reception-
ist, through his viewfinder. She notices him on the roof, screams, and then calls the police because she thought he was going to jump. He disappears, but after a second murder, they return to question her about the man she saw. In the process, alcohol-
ic Officer Dave Murcheson (Tom Bastounes) provides a third narrative strand that comments on the first two, since he falls for Kate while looking for Frank.

Now, Frank’s got two bodies to his name and a connection to Kate, who tells dif-
ferent people different stories about her shiner—and about her marital status.

From the opening sequence, the film appears to share thematic similarities with John Dahl’s Chicago-situated You Kill Me with Ben Kingsley as an alcoholic hit man and Téa Leoni as a fellow tippler, except The Merry Gentleman isn’t a black comedy, despite
a few subtle comic touches, like the world's most depressing office Christmas party.

Plus, the central duo doesn’t really meet until the halfway point, not counting an earlier, "unplanned" encounter in Kate’s building. So, Frank does Kate a good turn (helps her with her tree), and she does one for him (takes him to the hospital after he passes out), unaware that this considerate stranger is also a skilled assassin.

If a first film reveals where an actor-turned-director’s head is at, then Keaton’s mind is in a dimly-lit, but not hopeless place. The Merry Gentleman starts out as a two-hander, but Macdonald gets all the best scenes, while he barely speaks a word. Frank’s die is cast, but Kate’s future is unwritten, and a hit man helps her to write it. 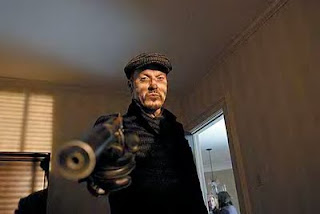 In the end, Keaton’s carefully observed debut is so low-key it could slip between the cracks of the summer movie season, especially since the studio chose not to release it around the holidays as they should have, but like its characters, the film could use a little affection: it’s as if Edward Hopper turned to digital video instead of paint.

"You just might be the sweetest man I’ve ever met."