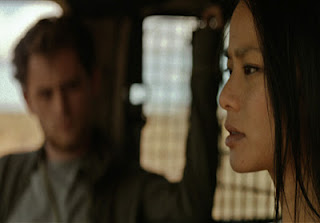 I missed Seat-
tle writer/dir-
ector Megan
Griffith's last
film, The Off
Hours, when
it played SIFF
'11, but I knew
I couldn't miss
Eden, which
arrived with
even greater
acclaim af-
ter premier-
ing at South
by Southwest (where it won the audience award for narrative feature).


The storyline also caught my attention since Griffiths and co-writer Richard B. Phillips drew from the real-life experiences of a 19-year-old woman sold into sexual slavery. It sounds sensationalistic, except it isn't. Since the press screening, I've talked to several people about the movie, and they all liked it. SIFF '12 has barely begun--and it's already got its first hit.


The story begins in 1994 with Hyun Jae (Jamie Chung, a one-time MTV's Real World cast member in a revelatory performance), a New Mexico high school senior of Korean descent, who helps out her first-generation parents in their gift shop. After getting hold of a fake ID, the inexperienced teen hits the bars one night with a friend, in hopes of meeting cute guys.

That's exactly what happens when Hyun Jae clicks with a firefighter, who offers her a ride home. The next thing she knows, he hands her over to another man, and her long nightmare begins. Federal Marshall Bob Gault (Beau Bridges) runs the warehouse-like Nevada brothel where she ends up, using his law-enforcement career as a cover for his illicit activities. The other girls are mostly foreign-born, and those who try to escape are killed.

Though Hyun Jae tries to make a run for it the first time she gets the chance, she realizes they'll kill her or her family members if she does it again, so she bides her time. Vaughan has a crack addiction, which makes him especially vulnerable, so Hyun Jae works hard to win him over.


It takes time, but she eventually works her way up the ladder, such that she's spending more and more time alone with the former Army soldier, which allows her to learn how the operation works, and to figure out how she might be able to make a final break--and shut the whole thing down.

Once Hyun Jae gains Vaughan's trust, Eden turns into a two-hander predicated more on character development than action, but it never has the scrappy indie feel that has come to define the work of Lynn Shelton, Mark Duplass, and other filmmakers with whom Griffiths has worked (she co-produced Your Sister's Sister). Filmed in Washington and Nevada, the film plays more like a true-crime thriller, and if Griffiths hadn't cast the right actors, it wouldn't work, but she did. Chung and O'Leary play off each other marvelously (and Bridges is suitably oleaginous).

Because she's dealing with difficult subject matter, I wasn't sure how the Seattle audience would react, but I haven't met anyone yet who wasn't impressed, including Charles Mudede, who praised it in The Stranger, and Sean Axmaker, who did the same in the pages of The Seattle Weekly.

Personally, I wish there'd been more information, by way of inter-titles, at the end: I'd love to know what Chong N. Kim, the film's real-life model, is doing now, but Google handily answered my question. In that sense, the film reminded me of Gerard Naranjo's Miss Bala, which also runs viewers through the ringer with a beauty pageant contestant caught up in a grueling situation--at the center of Mexico's drug war, with brutal cartel members on one side and corrupt drug enforcement agents on the other.

In both cases, the filmmakers manage to avoid exploiting their actresses while depicting exploitative scenarios, a harder trick to pull off than it seems, or the multiplex wouldn't be littered with cut-rate actioners that claim outrage over the victimization of women while treating them like sexy pawns in scenarios where the hyper-violent male vigilantes are the true stars. In Eden: a female captive becomes her own savior. 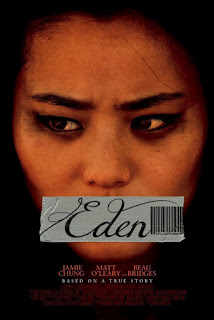 Eden plays the Egyptian on May 19 at 9:15pm, the Uptown on May 21 at 4:30pm, and Everett Performing Arts Center on May 29 at 8:30pm. Griffiths, producers Colin Plank and Jacob Mosier, and production designer Ben Blankenship are scheduled to attend all screenings. As always, dates and times are subject to change. Images from Centripetal Films.
Posted by kathy fennessy at 11:20 PM