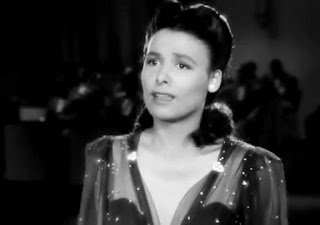 Belfast-born cinema historian Mark Cousins (The Story of Film: An Odyssey), who was just in town with a documentary about Orson Welles, is back with an essay film about two very different 20th Century Fox musicals from Hollywood's Golden Age.

Storm in My Heart is the logical title for his latest effort, a diptych of 1952's Technicolor With a Song in My Heart and 1943's black and white Stormy Weather. One film features Susan Hayward and the other features Lena Horne. Though born on the same day, June 30, 1917, and in the same city, Brooklyn, New York, one woman was white and the other was black. Further, Horne was from a prominent family and Hayward wasn't.

If not for race, Cousins argues, their careers might have looked similar, and they definitely didn't. And in these films, their scenes were even shot differently. If Hayward's performance was indivisible from the film in which it appeared, Horne's was placed such that it could be removed when it played in the South. I was hoping Cousins would return to that distinction at some point, except he never does, so I don't know if this happened with other films in which Horne appeared, but I can only assume that it did.

Cousins starts by presenting the credits for Walter Lang's With a Song in My Heart in full frame before shrinking it to one-quarter size. As he turns the volume down on the Hayward picture, he adds a quarter-size version of Andrew Stone's film to the screen. Russia-born Leon Shamroy shot both films, and the same personnel provided art direction, set decoration, visual effects, wardrobe and costumes, and sound. As Storm in My Heart continues, Cousins moves the frames around the screen and continues to alternate soundtracks. He also uses the blank space for inter-titles.

The frames talk to each other, though it's easy to miss details on the left side of the screen while watching the right. Or vice versa. It's an experiment, and an imperfect one, but it's amazing how often it works, i.e. Horne sings in one frame while Hayward, portraying real-life singer Jane Froman, does the same in the other, except we hear Horne's voice. Consequently, it looks as if Hayward is miming or responding to Horne, but then the audiences, one white and the other black, clap at the same time. 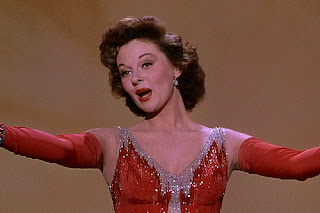 If the focus is on Hayward and Horne, Cousins provides notable facts about Stormy Weather players Bill Robinson, Ada Brown, Fats Waller, and the Nicholas Brothers. They aren't the kind that will brighten your day. Waller, for instance, died five months after the film's release. He was 39. And Robinson, the highest paid black entertainer during the first half of the 20th century, died penniless.

As for Horne, she broke most every racial barrier on the road to stardom, but had to suffer most every kind of indignity in the process. In that sense, Cousins' film is about her more than Hayward, and though it may not have been his intention to make Stormy Weather look like the better--or at least more enjoyable--film, that's exactly what he's done. Granted, only one of the two is a melodrama, so fun was never on director Lang's agenda, and he's downright shameless when it comes to milking the audience's tears.

The oddest part about Cousins' project is that he doesn't give equal time to both films. When the 78-minute Stormy Weather ends, it just...ends. The inter-titles continue to refer to both women, but With a Song in My Heart plays for another 34 minutes, which doesn't seem fair, except Cousins has a final trick up his sleeve. I won't spoil it, other than to say that he doesn't just take on Hollywood's racism and sexism, but militarism, too, since both films hold a sentimental view of American wartime activity.

As essay films go, A Storm in My Heart is one of the better ones I've seen, and I've seen a lot, including those of Chris Marker, Agnès Varda, and Raoul Peck. If anything, the juxtaposition at the end, which makes use of the patriotic song above, recalls Peck's I Am Not Your Negro, the Oscar-nominated documentary he built around a James Baldwin manuscript--and ends with the late Doris Day as a symbol of white suburban complacency. 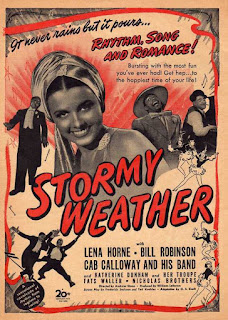 If there's one thing that sums up Horne and Hayward, as Cousins presents them in his essay, it's that they kept their own counsel. Though Horne had the deck stacked against her in many respects, she never stopped finding ways to make her mark--mostly outside of Hollywood--whereas Hayward had access to more movie-making opportunities, but didn't always make the most of them. I'm not sure that these particular films tell us as much about post-war America as Cousins intends, but they certainly tell us a lot.

Storm in My Heart plays SIFF Cinema Uptown on Sunday, May 19, at 1pm, and Tuesday, May 28, at 9pm. For more information, please click here.
Posted by kathy fennessy at 8:00 PM