Charlie Is Not My Darling: Mary Harron Puts a Feminist Spin on the Manson Family Saga

After making a film about Valerie Solanas (I Shot Andy Warhol) and Patrick Bateman (American Psycho), it follows that Mary Harron would get around to Charlie Manson, a real-life figure like Solanas and an evil mastermind like Bateman (I don't recall any murderers in The Notorious Bettie Page, but Harron has consistently gravitated towards protagonists with an inability to fit into straight society).

Her first feature in eight years arrives three years after the end of NBC's detective drama Aquarius, with David Duchovny as the head of an LAPD unit investigating the goings-on at the Spahn Ranch, and two years after the release of Emma Cline's novel The Girls, a fictional take on a Manson-type follower. And it beats Quentin Tarantino's Summer of '69 epic Once Upon a Time ... in Hollywood to theaters by two months (QT's sprawling film includes many of the same figures, including Damon Herriman's Manson).

More specifically, Charlie Says draws from Ed Sanders' 1972 book The Family and the late Karlene Faith's 2001 biography, The Long Prison Journey of Leslie van Houten: Life Beyond the Cult. I could also make a case for Olivia Klaus's Life After Manson, a 2014 documentary about model prisoner Patricia Krenwinkel that Harron is likely to have seen (not least because she thanks Klaus in the credits). All of this is to say that Manson and his bedfellows are as much a part of the cultural conversation as ever--two years after his death and 50 years after the events that put him on the map.

The good news is that Harron's film isn't really about Manson (played by The Queen's Matt Smith), but about three of the women, Patricia (Sosie Bacon), Susan Atkins (Marianne Rendón), and especially Leslie (Hannah Murray), with whom he was most closely associated (Kayli Carter plays Lynette "Squeaky" Fromme, who would, as a solo operative, attempt to assassinate a famous man, a dubious distinction she shares with Solanas).

Charlie Says begins with Leslie's arrival at the Ranch where she meets Charlie and the gang, including Beach Boy Dennis Wilson (James Trevena-Brown) and right-hand man Tex Watson (Gossips Girl's Chace Crawford in grunged-up mode). Charlie dubs Leslie "Lulu," and that becomes her name, because what Charlie says goes. From there, Harron, who co-wrote the script with American Psycho and Bettie Page partner Guinevere Turner, moves back and forth in time from the Ranch, three years in the past, to the California Institution for Women where Patricia and Leslie remain today.

In the pen, the women are locked up next to each other in separate cells, isolated from the rest of the population. With the warden's encouragement, they meet with rehabilitation counselor Karlene (Merritt Wever) who attempts to extricate them from Manson's psychic hold. The backward glances at the Ranch show how they fell under his sway (coincidentally enough, Sway is also the title of Zachary Lazar's 2008 novel about Manson associate Bobby Beausoleil and his ties to Kenneth Anger and Brian Jones).

Unfortunately, Harron isn't able to make Charlie any more charismatic than previous filmmakers. When he isn’t singing and strumming in a decidedly mediocre manner, he's doing the hippy-dippy messianic bit we've seen so often before (and without the humor Linus Roache brought to a similar figure in Panos Cosmatos's lysergic noir Mandy). If Smith is more convincing than Aquarius's Gethin Anthony, it's hard to get the balance right with a character who has to prove irresistible to his flock and off-putting to the audience.

More than anything, Charlie is a misogynist creep. To women without any direction, he’s father, lover, and religious leader all rolled into one. In his presence, they no longer have to think; just do as he says. As Patricia tells Leslie, the goal is to kill their egos and become one consciousness--all the better for him to manipulate them into sex, theft, and eventually, murder.

Throughout, we see most everything through Leslie's eyes. Though Murray has appeared in high-profile programs like Skins and Game of Thrones, she comes across as the least experienced actress of the three; more naïve and uncomfortable than her credits would indicate. Intentional or otherwise, it works for the part. She's softer and slower than the other Manson women, aka "girls," but she's also more watchful and cautious. In my high school days, we would've called such a childlike, dreamy creature a space cadet.
If the goal was to make her likable, Harron and Murray have succeeded.

That said, there's a difference between likable and relatable. The point of the film isn't to show how any young woman could've followed the same twisted path. There have been plenty of other cults, but there has never been one exactly like the Manson Family.

Crucial incidents include Charlie's jubilation when he finds out the Beach Boys have recorded one of his songs, "Cease to Exist" (re-titled "Never Learn Not to Love")--and his rage when producer Terry Melcher, the subject of Jeffrey Melnick's recent Pop Con paper, declines to offer him a contract. It's well-worn territory, but sets the scene for the bloodshed to come.

As American Psycho proved, Harron knows from violence. The Tate-LaBianca murders take up little of the film's running time, but they make the necessary impact; they're brutal, bloody, and empathy-free. When Sharon Tate (Grace Van Dien), who was leasing Melcher's home with Roman Polanski, begs for the life of her unborn child, Tex is thoroughly unmoved. 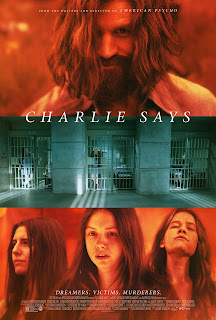 At 104 minutes, Charlie Says doesn't overstay its welcome, but it takes Harron until the very end to get to that moment of realization. I'm not sure it's possible to make a completely successful film about the Manson Family, and the director dances around the edge of disaster at most every turn, but that moment--and Hannah Murray's ability to sell it--is worth the wait.