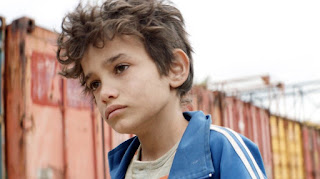 If it's possible for a 12-year-old Syrian refugee to exhibit all the brooding rebelliousness of James Dean at the peak of his powers, Zain Al Rafeea has got it on lock.

With his full lips and attractively-mussed hair, it's clear that he's going to grow up to be a heart-breaker. In Nadine Labaki's third film, winner of the Jury Prize at Cannes, he plays Zain Al Hajj, a boy who wants to sue his parents. When the judge asks why, he explains, "Because I was born."

It isn't clear at first why Zain thinks his parents are so terrible, other than that they're as poor as dirt. Labaki (who plays his mother) uses the scene to springboard into the recent past. Until he ends up in court, the undocumented boy earns his keep by making corner shop deliveries and selling juice to passersby. If he's surly to adults, he's protective of his 11-year-old sister, Zarah. When she gets her first period, he knows exactly what to do. It seems odd that he would know more than a girl, but he's a crafty kid. He's also worried that shopkeeper Assaad will attempt to buy Zarah off his parents when he finds out about her step into adulthood. 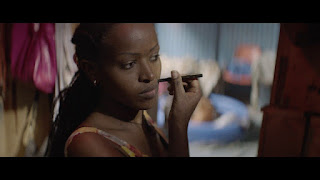 After Zarah exits the scene, just as Zain predicted she would, he raises a ruckus, so his mother slaps him around and curses him with impunity. It's the last straw. He steals a bag of groceries, hops on a bus, and finds himself at an amusement park where he befriends Ethiopian migrant worker and single mother Rahil (Yordanos Shiferaw, a potent mix of mystery, vulnerability, and resilience), who invites him to stay with her and her baby, Yonas, in their corrugated-tin shack.

At this point, Labaki switches the focus to Rahil's increasingly desperate attempts to remain in the country. When she fails to return home one day, Zain is left to figure out what happened to her and to look after Yonas. It would be a tall order for anyone, but especially for  a 12-year-old without a cell phone and very little money. It's a tall order for Al Rafeea, too, since he has to spend a substantial amount of time dodging aggressive pedestrians on crowded city streets while holding a hungry infant. If he has a good, strong grip, it's nerve-wracking watching him try to navigate a single block.

The longer Rahil is away, the more impoverished Zain becomes. If he's resourceful as hell, he's no miracle worker, and in time, he runs out of water, food, and shelter. By opening Capernaum in a court room, Labaki signals to the audience that he'll emerge from her film alive, but Zarah, Rahil, and Yonas are another story (to which she will eventually return). 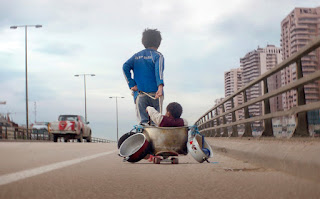 By the time Zain ends up in court, it comes more as a relief than a disappointment, since his days on the streets were surely numbered, though I never bought the suit against his parents. If Labaki uses it as a framing device, even she seems to lose interest, since she speeds though it so quickly, but she makes up for it with an array of colorful characters like the milky-eyed baby merchant and the uniquely elegant Cockroach Man. She paints a multi-faceted portrait of life among Beirut's underclass. No wonder she named her film capernaüm, aka chaos.

And then there's Zain, who never stops being engaging. He's clever, funny, and can swear like a man four times his age. He isn’t perfect, and he makes mistakes, but Labaki gives every indication that he isn't going to follow in his parents' footsteps. His future may be unwritten--but at least he has one.