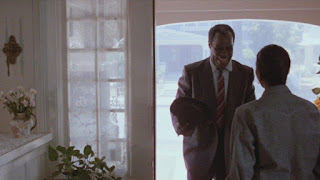 
"When you're made to feel half a man, what do you think the other half is?"
--Harry Mention (Danny Glover)

It says everything about Danny Glover that he co-produced To Sleep With Anger three years after 1987's Lethal Weapon solidified his stardom. Instead of more big-budget genre fare, he took the time to work with Charles Burnett. If Burnett's 1977 debut, Killer of Sheep, is now considered a classic, it was rarely screened for 30 years, largely due to music rights issues (the National Film Registry added To Sleep With Anger to its ranks in 2017, 27 years after Killer of Sheep). Glover, in other words, was taking a chance, no matter how well respected the LA Rebellion director was at the time.

In Burnett's third film, which the Criterion Collection will be releasing on February 26, Glover's Harry Mention doesn't make his entrance until the 14:49-minute mark, time enough for the filmmaker to shape the contours of a middle-class black family in South Central Los Angeles. Harry, a Southern family friend traveling from Detroit to Oakland, says that he could use a place to stay (Glover's hair has been dusted with grey to make him appear older than his 44 years). He's a superstitious gentleman with strange beliefs, but Suzie (Mary Alice) appreciates his old fashioned courtliness. Her husband, Gideon (Paul Butler), is just happy to reminisce about old times.

The audience knows better. Minor, if troubling events transpire just before Harry gets to town, and the phenomenon intensifies upon his arrival. The way Burnett keeps returning to an ominous flock of birds gathering around the house brings Daphne du Maurier's 1952 short story (and Alfred Hitchcock's subsequent film) The Birds to mind. They know what’s up.

As Harry goes about his business, he discomforts every member of the family, including Gideon and Suzie's sons, Junior (Carl Lumbly, star of Burnett's 1996 TV movie Nightjohn) and Sam, aka Babe Brother (Richard Brooks, seconds away from his role as ADA Paul Robinette on Law & Order), and their wives, especially Babe Brother's spouse, Linda (Sheryl Lee Ralph). If the insecure Babe Brother is susceptible to Harry's charms, the self-assured Junior is not. Other skeptics include Hattie (Ethel Ayler), a former lover who has found God. The more Harry needles her, the saltier she gets. He has a way of reminding people about things that they'd rather forget, and whenever he pulls out his knife to cut an apple or to clean his nails, he seems to be taunting those who believe him capable of murder.

The longer he stays, the more the situation devolves. If anything, Harry seems to be feeding off of the family's energy as if it were blood (at which point I have to mention that the delicately pretty Vonetta McGee, who plays Junior's pregnant wife, previously starred as the love interest in Blacula). As they grow more fatigued and take to fighting among themselves, Harry becomes more powerful and persuasive to the extent that Babe Brother is tempted to follow him right our of town, wife and child be damned.

Does Harry represent the way black Southerners can never truly escape a past rooted in slavery? Or is he a devil in the shape of a man? It's to Bur-
nett's credit--and the film's benefit--that he doesn't spell it out, though the word "devil" is right there in the script (spoken by Suzie, if I'm not mistak-
en), so that's part of it, but since To Sleep With Anger isn’t a conventional horror film, possession doesn't answer every question his presence raises.

If the film wasn't a hit, mostly because it played in few theaters and didn't have the chance to reach many viewers, it's only grown in stature since. That said, Burnett has never been much of a visual stylist and the performance quality is variable, which may come as a surprise, since he was working with an experienced cast for the first time, but the bit players bring a certain charm to the scenario. Harry's friends, who all gather for a seemingly endless house party, are all under his sway, so it only makes sense that they're a little stiff and awkward--hypnotized, you might say (they also provide a lot of the film's humor with their odd manners, cock-of-the-walk outfits, and colloquial sayings).

But Danny Glover! I don't want to say that he's the reason to see the film, because that isn't fair to Burnett, who wrote and directed it, but if Glover wasn't able to master Harry's dual persona, the real and the supernatural, it wouldn't work, but it does, because he never overplays his hand. Harry isn't a mustache-twirling villain and any violent tendencies are merely implied or suggested. Together, Burnett and Glover created an indelible character out of the most rudimentary elements. Harry doesn't bring evil into the lives of the family. The evil is already there; he just holds the key to unlock it.

Whether Glover sees the film as a turning point in his career, I couldn't say, but through his production shingle, Louverture Films, he's ushered in an array of well-crafted films on social issues, most recently Matt Porterfield's Sollers Point and Nadine Labaki's Capernaum. He's also taken small, but pivotal roles in films from emerging directors, like Tom E. Brown (Pushing Dead) and Boots Riley (Sorry to Bother You). Chances are, the desire to be a force for good in the filmmaking world was always there, but Charles Burnett, much like Harry Mention, provided the key that he needed.