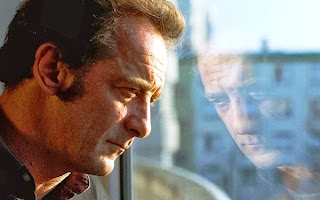 
With Bastards, Claire Denis returns to the shadowy, dread-filled filmmaking that characterized 2006's The Intruder (L'Intrus), which was also shot by the amazing Agnès Godard.

She starts by showing the central characters going about their business, but without introducing them or explaining their connections to one another. Denis continues to withhold information throughout the film, doling out bits and pieces here and there, but always keeping a few crucial details to herself.


After his brother-in-law, Jacques (Laurent Grevill), kills himself, Marco Silvestri (Vincent Lindon, who appeared in Denis's Friday Night and shares a countenance with Yves Montand), a coiled tiger of a tanker captain, returns from the Middle East to Paris to help out his sister, Sandra (Julie Baitaille). Sandra holds business magnate Edouard Laporte (aquamarine-eyed Michael Subor, The Intruder) responsible for her husband's death. 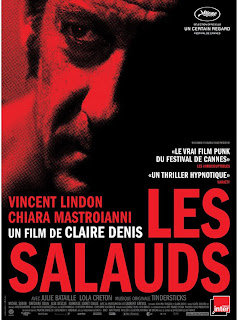 Now the family business, which revolves around ladies shoes, is in shambles, and Sandra will have to file bankruptcy in order to avoid her debt to Laporte.

Marco proceeds to move into the same noirish, spiral-staircased building where Laporte's mistress, Raphaëlle (Chiara Mastroianni), and their young son, Joseph, reside. A subtle sexual attraction develops between the two; the divorced man may be older than the single woman, but he's considerably younger than Edouard, so it's not too surprising when they embark on an affair, but it isn't clear whether or not Marco is just using her to get to Edouard.


While the adults are dealing with their issues, Marco's teenage niece, Justine (Lola Créton, from Catherine Breillat's Bluebeard), ends up in a psychiatric facility due to her propensity to wander the rain-slick streets at night in the nude while wearing high heels, an arresting image, but not an especially persuasive one.

The head psychiatrist (Denis mainstay Alex Descas) tells Marco that Justine has a history of sexual abuse, but she remains such a cipher that the disclosure fails to carry the necessary weight. Between Créton and Mastroianni, there's also a fair amount of nudity in the film, though the men remain fully clothed, possibly because they exert all of the control, but it still feels exploitative--even if exploitation lies at the heart of the story.


Further, the narrative strands conjoin in a manner I found more dramatically than emotionally compelling (I preferred the open-endedness of The Intruder). This aptly-titled film is a chilly piece of work, and that includes the Tindersticks' score, which calls on more electronic textures than usual. Chilly isn't a bad thing when it comes to Denis, but after the warmth of 35 Shots of Rum, Bastards isn't the triumph I was expecting.