What drives an audience to the movies? Some viewers go to see beloved stars, some for insightful directors, and some for a good laugh. Has that changed since the advent of sound? Judging from this year’s lineup at the San Francisco Silent Film Festival, running July 18-21 at the Castro Theatre, not much has changed at all.

Film stars started to draw progressively larger salaries during the silent period for a reason. Then, as now, a good actor provides the entry point for viewers into a fictional landscape that takes them out of their world and into adventure, and the 2013 festival offers one of the legends. Douglas Fairbanks grew to be a major box office draw throughout the world during the ‘20s with a series of swashbuckling period films, bringing to cinematic life the adventures of iconic figures like Robin Hood and D'Artagnan. The 2013 San Francisco Silent Film Festival affords attendees a chance to see one of his early films, Allen Dwan’s The Half-Breed (1916), recently restored through the efforts of the SFSFF and the Cinémathèque française.

Fairbanks plays Lo Dorman, the son of a Native American woman and an unknown white father. He lives among the redwoods on the outskirts of a small town, despised by the townfolks because of his ethnicity.  He finds fellowship when he encounters Teresa (Alma Rubens), a young woman hiding out from the law in the forest. The world they share inevitably collides with the mores of the town. Günter Buchwald will accompany the screening on the Mighty Wurlitzer. Buchwald has accompanied silent films for over 25 years, playing at silent film festivals around the world.

Certain directors, like Dwan with Half-Breed, use an impressive landscape and melodrama to depict human emotion. But some viewers choose their films based on the sensitivities of an insightful director who reveals the human heart of their characters through cinematic storytelling on a smaller scale. Yasujiro Ozu was a master of depicting ordinary people struggling with big but familiar circumstances, deftly blending comedy and drama for poignant results.

In Ozu’s Tokyo Chorus (1931), a young insurance man stands up for an older co-worker who is neglected on bonus day, resulting in a humorously escalating tit-for-tat with his boss, at the end of which he loses his job. The film depicts his struggle to support his family during the economically tough times in contemporary Japan. Ozu delicately portrays the emotional hardships involved, not just the economic ones, as the family has to cope with the salesman’s loss of status as well as income. Günter Buchwald will again provide the musical accompaniment.

Sometimes what an audience desires most from a film is escapism provided by laughter, to have a talented comedian lead them into a madcap adventure from the security of their theater seat. In Harold Lloyd’s Safety Last (1923), the small town everyman struggles to better himself financially by moving to the big city. Lloyd’s up-and-comer seizes opportunities as they arise with increasing risk of harm, mainly of the bodily variety. He is Ozu’s everyman thrust into a Fairbanks adventure.

Ultimately, the desire to get ahead leads to one of the most famous and breathtaking stunts in movie history: Lloyd’s climbing the façade of a 12-story building and hanging precariously off a clock face, which starts slowly detaching itself from the building. Lloyd climbed the building himself; no stunt man and no cinematic tricks were involved. The Mont Alto Orchestra, a quintet dedicated to authentic silent picture accompaniment, will accompany the film.

There are, of course, differences between modern and silent era audiences. Contemporary viewers can watch movies in their homes, but much is lost in doing so. Watching films with an audience, laughing together, crying together, and being amazed together heightens each viewer’s individual experience. To see a film on the big screen of a movie palace immerses the viewer in a way that watching a film on a TV screen, even a 65-inch high definition model, can’t. Of course, now there are synchronized soundtracks to film, providing voices and a score. However, the silent films weren’t watched in silence; live music accompanied the films, adding enormously to the story unfolding onscreen. The SFSFF excels in bringing the best silent film accompanists from around the world to play for the films. The festival provides a chance to see silent films as intended: with an audience, in a movie palace, and accompanied by live music.

Visit the SFSFFwebsite for the full schedule, program notes and ticket information.
Posted by Anne M. Hockens at 5:26 PM No comments: 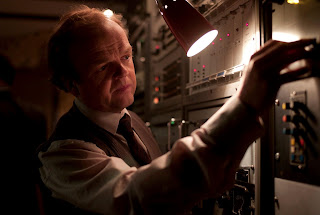 In Nicolas Roeg's Don't Look Now, Donald Sutherland played an American in Italy, slowly going mad in the wake of a terrible loss. His wife (Julie Christie) was with him in Venice, but he was the one seeing the strange visions. Compared to Toby Jones, the lead in Peter Strickland's second film, Berberian Sound Studio, he was tall and stolid, whereas the diminutive Jones looks frail and vulnerable right from the start.

Jones plays Gilderoy, a British sound mixer who travels to Italy in 1976 to work on The Equestrian Vortex, a giallo. Instead of opening with standard-issue credits, Strickland heads straight to the blood-red credits for the film-within-a-film as Broadcast's score fills the speakers (it features some of the last recorded vocals of Trish Keenan). Gilderoy's introduction to Santini's film doubles as our introduction to Strickland's. 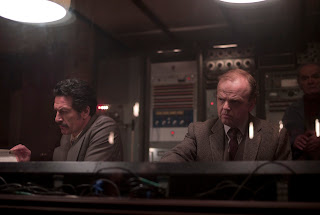 A specialist in
television doc-
umentaries,
Gilderoy is
both surpris-
ed and unset-
tled to find
that Eques-
trian has noth-
ing to do with
horses. And
that filmmaker
Giancarlo San-
tini (Antonio Mancino) is rarely around. Instead, he works with impatient producer Francesco (Cosimo Fusco) on the sound design, which encompasses dialogue, sound effects, foley work, wordless singing, and music.

Though the Italian crew speaks English, Gilderoy receives conflicting messages about the way things work at the studio. Money appears to be in short supply, and he comes to fear that he won't get anything at all.

If his male colleagues can be boorish, he finds an ally in Sylvia (Fatma Mohamed), an actress who admires his work, but the misogyny of the project, which involves the torture of witches, starts to grind him down. 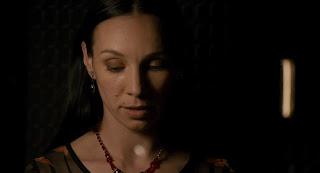 As in the gial-
los of yore,
particularly
those of Dario
Argento, the
lighting
scheme fav-
ors shadows,
and everything is brown and gold with splashes of red--radishes, tomato sauce, and a flashing "Silenzio" sign--but Strickland avoids any scenes from the fictional film. The sound is the thing, and whenever the foley artists fail to show up, Gilderoy steps in to do their job.

Once he transitions from observer to participant, though, his sanity takes a trip, and Strickland blurs the lines between the studio, his dreams, his mother's letters, and the world of the film. They all join together as one.

In its rigorous attention to sound, Berberian Sound Studio brings to
mind Francis Ford Coppola's The Conversation and Brian De Palma's
Blow Out, cinematic predecessors that revolved around audio experts
obsessing over the things they hear--or think they hear--on their reels. 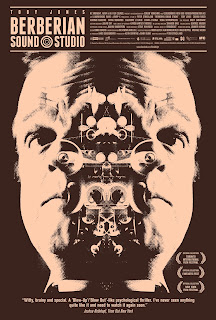 Is it significant that directors of Italian descent made those motion pictures? Probably not, but it's an intriguing coincidence, especially since Italy's Michelangelo Antonioni made Blow-Up, the British film that inspired De Palma's effort.

By comparison, Strickland has
made a smaller movie, and the
final sequence is so subtle that
I didn't realize it was over until
the closing credits began to un-
spool, and that's exactly how it
should be. Just as Gilderoy los-
es the ability to distinguish fic-
tion from reality, I found myself
letting go of my preconceptions about conventional thrillers to make way for a trickier proposition like Berberian Sound Studio.