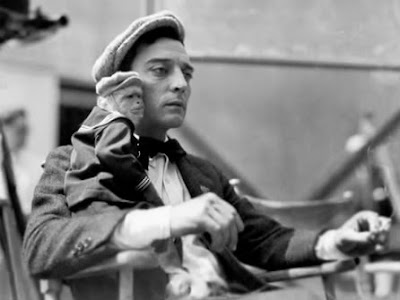 "I'm a photographer. Could I get a job here?" "Get a job here … with that cocktail shaker?"

The Cameraman marked Buster Keaton's move to MGM in 1928, and the loss of creative control that would lead to his eventual decline from stardom. In spite of this, it remains the ultimate refinement of Keaton's work in silent features, containing his best collection of comedy set pieces within a complex scenario. The Cameraman was also the last time Keaton performed the reckless physical stunts he'd become famous for, which the studio saw as an unreasonable risk to their valuable star. 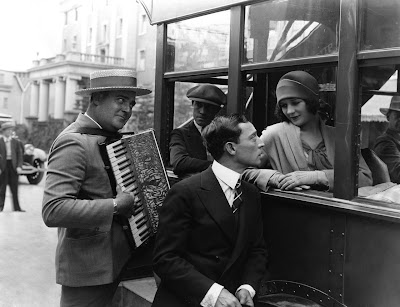 Buster wanders the city streets with camera and tripod making tintypes for ten cents. In the crush of a tickertape parade he spots lovely Sally (Marceline Day) and is instantly smitten. Keaton possessed the charming ability to express romantic infatuation as though he was hypnotized. As he poses Sally for the photo, she stands head turned to the side while Buster gazes at her and loses himself in the moment. Later, as he waits in the office of the newsreel service where she works, he dreamily peers over his photos and bats his drowsy eyes at her while Sally looks back at him sweetly. His corny slight-of-hand coin trick to impress her seems to say "Oh that was nothing!" In Keaton's hands it becomes a beautifully expressed and touching sentiment. Throughout his career Keaton typically played modest characters, intent on winning the heart of a girl by the use of endearingly pathetic gestures and flourishes, while the actual 'gags' would be seen as accidents of circumstance, often with spectacular results. As Buster takes Sally on a date, they attempt to board a double-decker city bus, but a surging crowd separates the two, with Buster being forced to the upper level while Sally remains below. As it moves down the street and they finally locate one another, Buster climbs down the outside of the bus and sits on a rear wheel fender to be near her. A big bump bounces Buster onto the street, he regains his wits, and chases after the bus, hopping once again onto the fender as they speed along. Keaton's character seems oblivious to any physical danger, blinded by his need to be with and please the girl. When in the end, he ultimately saves Sally from drowning his own peril is never considered. His rival guiltily takes credit for the rescue, leaving Buster alone on the beach, heartbroken with only his camera and an organ grinder's monkey. 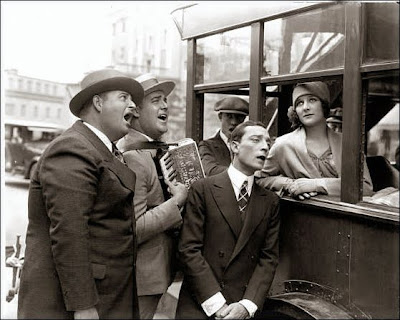 Among the brilliant comedy routines featured in this tour de force: A baseball game in pantomime at Yankee Stadium with Buster playing every position, including the umpire! To pay for their date, Buster nearly demolishes his room breaking open a dime bank, then proceeds to scatter the fist full of coins when he removes them from his pocket. Sally's close-up reaction is priceless! After the bus ride, he takes her to a public swimming pool. Buster and another man attempt to disrobe in a three-by-three foot dressing room with hilarious results. "Will you keep out of my undershirt?" As she walks alongside the pool in her swimsuit, Sally is swarmed by overly attentive young men. When Buster finally emerges he has somehow been given absurdly over-sized swimwear. Forced to compete for her attention, he loses his suit when he jumps off the high dive, a routine repeated countless times by others after Keaton. Running gags throughout the film include constant collisions with the same beat cop who's convinced there is something wrong with Buster. "I'll try your reflexes to see of you're goofy." The monkey he appears to have accidentally killed springs back to life and clings to Buster throughout the rest of the picture. In one scene Buster cranks away on his camera, filming a gang war in Chinatown, while the tiny monkey in a sailor suit cranks away on a machine gun! 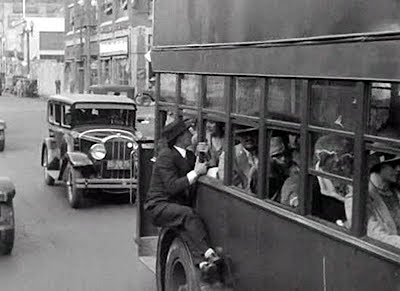 Keaton was also well known for his effective use of props in outrageous sight gags. The motorcycle in Sherlock Jr., the enormous ladder in Cops and the tiny gun in Go West are a few. In The Cameraman, Keaton's constant companion is the large and ungainly camera and tripod that virtually becomes another character with a mind of it's own. He stumbles over and into it, inadvertently knocks the cop unconscious with it, uses it to engage the girl and manages to break the same window with it repeatedly throughout the film.

Buster is a hopeless romantic, regardless of what it may cost him. His finances, social status and personal dignity are always on the table. And yet, he is shy and his desire is initially hidden from Sally, revealed only to the camera when she's not looking. Buster usually found a way to win the girl over by the final reel. Of course in Go West, the girl was replaced by a cow, 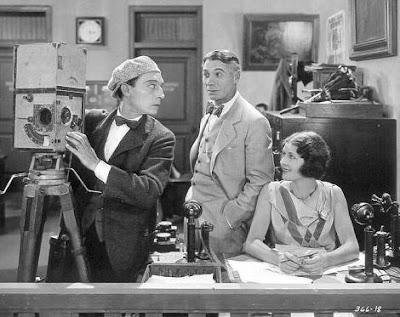 Posted by David Jeffers at 6:00 PM