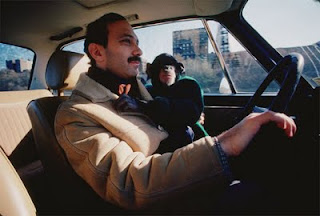 Because I have
three jobs, I
can’t attend
every press
screening, and
that’s fine, be-
cause I’d nev-
er have time to
cover them all.


Consequently, I’ve been concentrating on the films that interest me
the most. This method reduces the number of pleasant--and unpleas-
ant--surprises, but I can always catch up with the unexpectedly strong
selections during the festival proper, which began on Friday, May 20.

Or at least I can try. The great thing about SIFF is that it brings a lot of
worthy films to light. If you miss something during the festival, there’s always the possibility that you can catch it afterward through theatrical screenings, video, cable, network and public television, downloads, and streaming video. (The options appear to be multiplying by the minute.)

When it comes to documentaries, for instance, PBS’s Independent Lens
often snaps up some of the finer entries, most recently the Oscar-nomi-
nated Waste Land (disclosure: I work part-time at KCTS 9). There’s a
catch, though: you sometimes have to wait a year, if not longer. Mugabe
and the White African (SIFF '10), for instance, doesn’t air until this July. 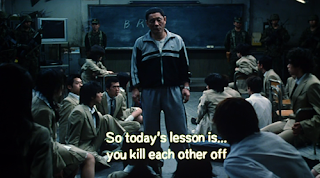 That said,
there’s noth-
ing like exper-
iencing a film
with an enthu-
siastic audi-
ence. I’ll al-
ways remem-
ber catching
Kinji Fukasa-
ku’s final film,
Battle Roy-
ale, at the Cinerama. I’m sure I would’ve enjoyed it on my computer or TV screen, but the reactions from the crowd added to the excitement.

I haven’t seen anything quite that exciting yet, but that’s no com-
plaint; Fukasaku set the bar impossibly high (at least within the
realm of dystopian action-adventure fare). So far, two documen-
taries have impressed me the most: James Marsh’s Project Nim
and Andrew Rossi’s Page One: Inside the New York Times.

"It's the closest thing I can imagine to a walking J.G. Ballard
novel, a chilling story of mad science that would sound like
a bad TV movie adaptation of a Ray Bradbury short story."
-- Empire contributing editor Damon Wise on Project Nim

Marsh, a British director who divides his time between fiction and non-
fiction films, has a mixed record with SIFF, but the tide should turn with
Nim, which recounts the remarkable story of a remarkable creature.

Five years ago, the director brought the narrative feature The King to
town, which met with a fairly negative reaction. The film had its admir-
ers, such as KIRO’s Tom Tangney, but I had to look hard to find them.

Then, in 2008, SIFF screened Man on Wire, which met with an over-
whelmingly positive response, and won the best documentary Oscar. Time will tell if Nim can scale those heights. Due to a subject that has little to do with world affairs, a nomination seems unlikely, and that’s unfortunate. Then again, Man on Wire was a left-field entry that went the distance.

Further, Amir Bar-Lev’s impassioned Tillman Story (SIFF ’10), which
should’ve been a sure-fire Academy Award contender, didn’t even re-
ceive a nod (in a strong year for documentaries, it topped my list).

Following on the heels of the well received Red Riding trilogy--Marsh
directed 1980 with Paddy Considine--his new film covers three dec-
ades in the life of Nim Chimsky (a pun on the name of linguist Noam
Chomsky), who has inspired books, articles, and the movie Project X.

In 1973, Columbia University behavioral psychologist Herb Terrace, the
Black Hat of the piece, placed Nim with his former lover, psychology stu-
dent Stephanie LaFarge, and her Upper West Side family, who raised him
as one of their own; he romped with the kids, he romped with the cats.

Terrace aimed to prove that a chimp can learn to communicate using
American Sign Language (ASL). The narrative takes one harrowing turn
after another as Nim moves, literally, across the country. Just when it
seems things can’t get much worse, the most unlikely hero arrives to save
the day. Marsh raises any number of fascinating questions about nature
vs. nurture, making Nim a must-see for animal lovers of every kind.

"The media is not the message. The message is the media."
--David Carr, Page One: Inside the New York Times

While Rossi’s Page One, a completely different kind of document-
ary, adheres to a more conventional structure, media consumers are
likely to find it equally absorbing, if not more relevant, since the land-
scape keeps undergoing one metamorphic change after another.

In examining the relationship The New York Times has established
with entities like WikiLeaks, Rossi shows the Old Grey Lady embrac-
ing new media and looking beyond the borders of an insular environ-
ment to cut costs and remain relevant, but it's hardly a puff piece.

While he could’ve concentrated soley on Times staffers, like exec editor
Bill Keller and reporter Brian Stetler, who'll be in town to support the film,
he brings outside voices into play, including representatives from Gawker,
Vice, The Atlantic, The New Yorker, and Wikipedia. Former staffer Gay
Talese, author of The Kingdom and the Power: Behind the Scenes at the
New York Times, helps to provide historical context, while Rossi also in-
corporates scandals involving reporters Jayson Blair and Judith Miller. 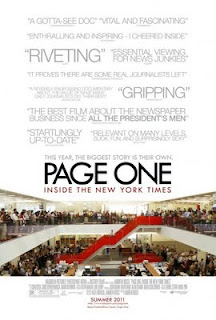 These are a lot of hyper-ar-
ticulate people, but that's par
for the course with the news
business. Then there's colum-
nist and former Carpetbagger
David Carr. As a filmmaker,
Rossi is perceptive enough to
know that when it comes to a
guy this interesting: the more
screen time, the better. Of all
the Times staffers, he spends
the most time with the hoar-
se, hunched-up, ex-crack
addict and single father

Like Stetler and media editor
Bruce Headlam, Carr has help-
ed The Times transition into the
21st-century. Though it took him
a while to embrace Twitter, he now has 322,000+ followers. As Rossi depicts him, he's a witty, infuriating man with a zero-tolerance policy when it comes to bullshit--it's worth the price of admission alone to watch him put the Vice crew in their place.

Endnote: Bob Ingersoll, who appears in the film, will be at-
tending the Project Nim screenings. Images from Twitch and
IMP Awards. Page One opens in Seattle on July 1 (venue TBA).
Posted by kathy fennessy at 7:47 PM