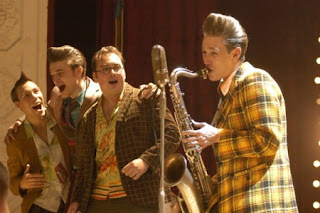 
Everyone has seen a hipster, but no one is one.
-- Douglas Wolk, 2010 EMP Pop Conference

Don't let the title scare you away. Hipsters has nothing to do with
the black-clad indie-rockers who roam around the clubs and bars
of Capitol Hill and Williamsburg, but a group of colorfully-dressed
kids giving the finger to the aesthetic dogma of 1950s-era USSR.

Our guide into this eye-popping world--think plaid and floral prints in
chartreuse and fuschia--is Mels (Anton Shagin), a Moscow lad who lives
like a good little communist until he meets pretty Polly (Lilya 4-Ever's
Oksana Akinshina), after which he poufs his hair into a sky-scraping
pompadour, secures a garish suit, and turns into Mel. Soon, he's hitting
the town with Polly and her pals, like Fred (standout Maksim Matveev),
who thrill to the illicit sounds of Duke Ellington and Charlie Parker. 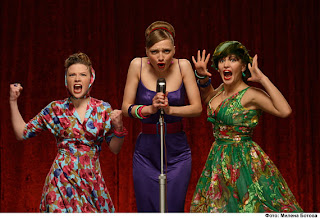 Since this is a
musical com-
edy, not a doc-
udrama, Mel
learns to play
the saxophone
in a matter of
minutes, thus
securing his
position as a
part of this
Russian rat
pack. As the
elusive Polly starts to yield to his overtures, Mel's old comrades plot to destroy the hipster community once and for all, but bigger forces are at play.

If the scenario sounds political, director Valery Todorovsky (The Land
of the Deaf) elevates fashion, dance moves, and romantic entanglements
over any larger statements about the Soviet regime. Sure, it was repres-
sive, but so were the hypocritical worlds depicted in Rebel Without a
Cause and Grease, the sort of touchstones his us-against-them story
suggests, along with Hairspray, Swingers, and Leningrad Cowboys
Go America. Hipsters doesn't dig as deep as it could--and probably
should--but it's frequently quite spectacular. Definitely recommended.

Endnote: Todorovsky will also be at the 6/12 screening of The
Land of the Deaf (12pm, Pacific Place). As always, dates and tim-
es are subject to change. Please visit the official website for more
information. Images from Stockholm International Film Festival.
Posted by kathy fennessy at 10:00 AM