World in Your Eyes: 35 Shots of Rum 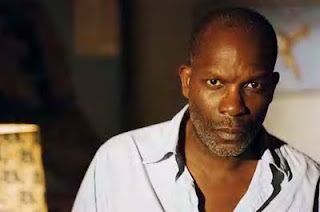 "I have the feeling I'm going to work often with you, because there is something in you that is so calm, that gives me, helps me to create a character with you. You're a mysterious guy."
-- Claire Denis upon meeting Alex Descas

Taxis and trains hurtle though the night, lights flash and fade, reflections appear and disappear. In the play of burnt orange and acid green against black, cinematographer Agnès Godard channels Edward Hopper, but with movement and music by the Tindersticks. Gradually, two faces come into focus: a train conductor (Alex Descas) and a college student (Mati Diop).

Thus Claire Denis sets the scene for 35 Shots of Rum, her ninth feature. Never one to tell when she can show, it transpires that the two disparate characters are father and daughter. Their harmonious home life indicates that they've been living without a mother figure for some time now.

Gradually, Denis introduces their extended clan: Gabrielle, a chain-smoking cabbie (Nicole Dogué), and Noé (Grégoire Colin), a cat-loving computer technician. The former has eyes for Lionel, the latter for Jo. Lionel prefer single life. "We have everything here. Why go looking elsewhere?" 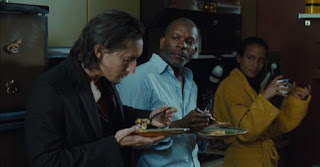 Meanwhile, René, one of Lionel's fellow conductors, has just been made redundant. Denis hints that the same could happen to him: best enjoy the life he has while he can.

Later, when Gabrielle's car breaks down as the four are en route to a concert, Lionel's coolness towards her becomes clearer: he sees her more as a friend or a relative than a romantic interest, but Josephine may be more frightened of her feelings for Noé than uninterested or unattracted.

A series of losses, both big and small, force father and daughter to reassess their cozy, if unchallenging domestic arrangement (I have to admit that I saw one of the losses coming from a mile away, and still haven't decided whether it's one of the script's weaknesses or not).

35 Shots isn't one of Denis's mind-fuck movies like The Intruder, but something more intimate, like Nénette et Boni or Friday Night (all of which feature Colin, a Modigliani painting come to life). It's the rare Parisian entry that eschews moneyed intellectuals and banlieu dwellers for regular working class folk. It is, in fact, the closest she's come to social realism, though Godard's impressionistic camera work prevents it from crossing that line.

Further, Denis populates the picture with characters of color, and never presents the situation as an issue, just a fact of life. Of French and Brazilian descent, the director grew up in West Africa, an influence that has seeped into many of her films (Chocolat, No Fear, No Die, I Can't Sleep).

Lionel is black, Josephine is biracial, and the worlds they occupy, the conductor community and the anthropology department, are mixed (as is their neighborhood, which is located just outside Paris). Inspired by Yasujiro Ozu's Late Spring, Denis's main concern is the relationship between father and daughter. Most movies that depict such closeness end in tragedy; father dies, daughter dies, or some evil interloper comes between them.

Denis has little interest in that kind of scenario. Lionel and Josephine love one another, but can't lean on each other forever. As some point, they need to move on, to create new communities for themselves. The result marks one of Denis's smaller films--and one of the subtle Descas's best performances. He spends more time looking and thinking than acting or talking, but sometimes that's more than enough: his eyes speak volumes.

35 Shots of Rum plays the Northwest Film Forum 11/6-12. The NWFF is located at 1515 12th Ave between Pike and Pine on Capitol Hill. For more information, please click here. Images from Daily Plastic and Floating World.
Posted by kathy fennessy at 11:00 AM No comments: