Love Me Some Highway 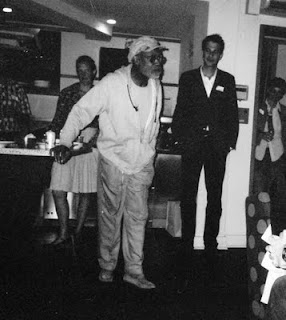 Makin' your own bed ain't no guarantee it's gonna be comfortable.
-- Melvin Van Peebles

A reimagining of his 1982 Broadway play Waltz of the Stork, Confessionsofa Ex-Doofus-ItchyFooted Mutha recounts an eventful life, the regrets amassed, and
the lessons learned along the way. In his 9/9 introduction at the Northwest Film
Forum, Van Peebles, according to a friend, clarified that although he shares bio-
graphical details with the character—like a Chicago birthplace—it isn't a self-portrait.

Better run through the jungle...

Instead of casting younger actors to play Itchyfoot from 14-45, the septuagen-
arian tackles every age, which isn't as awkward as it sounds, since he narrates the entire time; it might actually present more of a disconnect for baby-fresh faces to attach themselves to his honeyed growl, like a warped version of The Wonder Years.

In the first act, Itchy travels from Chitown to New York. On the way there, he witnesses a mob hit and almost drowns. Once he washes up on the shores of
the Hudson, he spends his days listening to the blues and poring through the
travel books at the library. As loose-limbed funk plays in the background (Wil-
liam "Spaceman" Patterson served as music supervisor), black and white foot-
age commingles with color stock, and montage meets musical interludes.

It isn't always easy to follow what's going on, but it's easy to lose yourself in
lines like, "That light at the end of the tunnel could be a freight train comin' the
other way” and "The [Big] Apple ain't all that malevolent, but it can be a bitch.”

To earn his keep, Itchy drifts through a series of menial jobs, discovers sex,
and gets busy with a variety of honeys until he meets Rita, a classy sorority girl,
but then the wanderlust returns and he joins the merchant marines—another bio-
graphical detail—through which he meets biddies eager for male companionship
and pirates out for blood (son Mario, director of Baadassss, plays their captain).

After 11 years at sea, he continues to travel, carouse, and dance his way from Afri-
ca back to the Apple. Rambling, amateurish, artistic, funky, and funny, Van Peebles'
seventh film—not counting shorts—will exasperate some viewers as surely as it will delight others. To these eyes and ears, Melvin Van Peebles' picaresque way with words combined with his puckish personality makes the whole damn trip worthwhile.

Confessionsofa Ex-Doofus-ItchyFooted Mutha continues at the Northwest Film Forum through 9/14 at 8pm. The NWFF is located at 1515 12th Ave. between Pike and Pine on Capitol Hill. For more information, please click here. I took the photo of Van Peebles. Previous images from The Village Voice (Nick Pinkerton didn't like it), Hammer to Nail (Cullen Gallagher did), and Rotten Tomatoes.
Posted by kathy fennessy at 2:00 PM No comments: