Sincerity and Violence, or What I Did on My Summer Vacation

La Chinoise doesn't concern the Chinese--not directly, at any rate--but rather communism, revolution, and youthful naivete. Jean-Pierre Leaud's Guillaume, a Brechtian actor, and his student friends have slogans for every occasion, from "A minority with the right ideas is not a minority" to the oft-quoted "It is necessary to confront vague ideas with clear images." Every few minutes, they paint new ones on the walls or scribble them on the blackboards that populate their borrowed flat (Godard's glowing red and blue inter-titles also read like slogans).

The dialogue extends the theme when the revolutionaries offer conversational gambits like, "We must be different from our parents" and "Reactionaries are paper tigers." All the while, unidentified cameramen, such as the great Raoul Coutard, capture their every move. Guillaume's flatmates include part-time prostitute Yvonne (actor/director Juliet Berto from Jacques Rivette's Celine and Julie Go Boating and Out 1), Yvonne's engineer boyfriend, Henri (Andy Warhol look-alike Michel Semeniako), and Guillaume's girlfriend, Veronique (Godard's second wife, Anne Wiazemsky, best known for Robert Bresson's Au Hasard Balthazar). 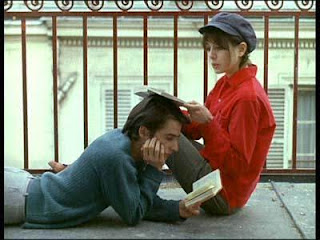 It's hard to tell if this was Godard's intention, but except for Guillaume, they come across as brain-washed zombies during the first two "movements." It's not that politics--particularly revolutionary politics--are dull, it's that people who talk about nothing but politics are dull. The slogans and literary quotations are interesting, but these collegiates rarely speak their own words. They're mouthpieces for others.

Fortunately, that changes once philosopher/activist Francis Jeanson enters the scene. His train-set conversation with Veronique during the third movement allows her to speak for herself--and to defend her deadly intentions. The eeriest part about this sequence is that her justifications for wanting to, um, blow shit up echo the unrepentant ramblings of Oklahoma City bomber Timothy McVeigh. But even at their most schematic--and La Chinoise is a distinct step in that direction--Godard's films are always worth seeing (and the key word here is seeing). His color-coded collage-like approach, in which classical music mingles with comic book art, still looks fresh--and feels even more radical than the politics at hand. And many discerning observers hold it in high regard. 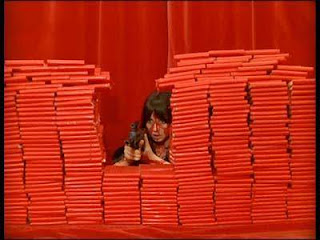 As The New York Times' Renata Adler enthuses, "[It's] Godard's best film by far since Breathless." This viewer, for one, would disagree (see below), but Village Voice critic J. Hoberman's claim that "Godard appeared remarkably prescient" can't be denied, since the picture predicts the French and American student riots of the following year. (While Godard proclaims Pierrot le Fou "an attempt at film," La Chinoise's subtitle translates as "a film in the making.") Significantly, Hoberman adds, "it's a movie that jettisons narrative suspense for something both more spontaneous and more detached." And yet Coutard shoots more close-ups than in most other works described as "detached" or "remote." The innate humanity of Godard's actors--Berto's shy smiles and Wiazemsky's gauzy gestures--undercuts the director's impulse towards abstraction.

One way or the other, 2008 has been a great year for the Swiss curmudgeon. This long-lost entry arrives in the wake of the Criterion Collection's two-disc editions of Breathless and Pierrot le Fou, and serves as a taster for the re-release of Contempt, which plays New York's Film Forum for the next two weeks. While the characters in La Chinoise rave about Nicholas Ray, the film they occupy lacks the emotional complexity that makes Ray's movies sing. With Contempt, Godard proves he can break hearts, too. That said, only La Chinoise features Claude Channes's Marxist-Leninist pop manifesto "Mao Mao." Everybody now: "Vietnam burns / and me I spurn Mao Mao / Johnson giggles / and me I wiggle Mao Mao..."