The Children of Don Corleone (and Red Bull) 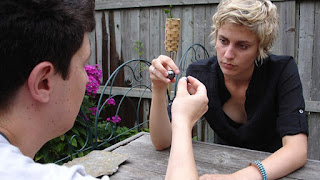 When it comes to "mumblecore," I have a high tolerance--even though I'm beyond the target demographic. [The term describes micro-budgeted, semi-improvised, relationship-oriented independents.] After catching Andrew Bu-
jalski's Mutual Appreciation, it occurred to me I might even be a fan. With the exception of Alex Katz's Quiet City (with Joe Swanberg), I haven't enjoyed the rest as much, but never felt as if I was wasting my time.

As for Bujalski, it's no wonder I prefer his work: He shoots on film, and edits by hand. It's a dying art. With the old guard, like Sidney Lumet (83) and David Lynch (60) making a permanent switch to digital video, it's heartening to see young filmmakers, like Bujalski and David Gordon Green (George Washington, All the Real Girls), keeping this venerable tradition alive.

Don't get me wrong. I'm not anti-video, but when everybody adopts the same format, we all lose. It's essential to keep the old ways and traditions alive. But even if Bujalski shoots his next movie on video, I won't label him a sellout--just as long as someone steps in to take his place (the fact that the indie icon is penning a studio feature is another matter entirely).

Similarly, if every musician in the world turned to their computer and ditched analog recording entirely, I'd feel as if the world dropped out from under me. That said, I have no problem with Röyksopp, Caribou, Various, and other laptop acts. I'm just grateful there are musicians still plugging
away--literally--with guitar, bass, and drums. To say nothing of cowbell! It's an imperfect comparison. So, consider these other near-obsolete items: the eight-track, the cassette, the lathe, the record player, the seven-inch single, and the 10-inch EP. In a few years, we'll be able to add CDs to that list.

There's no ideal parallel between the way films and recordings are made and appreciated, but my point remains the same. Black and white movies must continue. Silents, too. Even if they're shot on video. Filmmakers should be able to tell their stories and create their images however they choose. I would hate to see these options taken away from them. And that's what could happen if there's no audience for art that breaks the rules, and no way for artists to acquire the means to do so. All of this is to say that Hannah Takes the Stairs is the first mumblecore film to receive national distribution. It was shot on video, which is neither here nor there as my problem isn't with the look of the thing. I just didn't like it.

Joe Swanberg could have shot and edited it Bujalski-style--Guy Maddin-style even--and I would still feel the same way. Andrew Bujalski even acts in the film, much as he does in his own far superior Funny Ha Ha and Mutual Appreciation. And I found his clingy character just as tiresome as the whiny Hannah (co-writer Greta Gerwig). Actor-directors Mark Duplass (The Puffy Chair) and Kent Osborne (Dropping Out) didn't irritate me as much. Mike (Duplass) disappears before he has the chance to overstay his welcome, while Matt (Osborne) has an appealing sort of low-key charisma.

The story begins with Hannah and Mike. When their relationship hits the skids, she turns to Paul (Bujalski), her besotted boss at some kind of Chicago production company. Later, she turns to Matt, Paul's business partner. Hannah isn't a "woman of easy leisure" or a hopelessly confused romantic. She just drifts from man to man. The scenario isn't implausible. Nor is the acting terrible. I just didn't care. I can enjoy narratives about unlikable characters, but it helps when a filmmaker acknowledges that their protagonist might be off-putting. In this case, though, it felt as if Swanberg found the hipster-cute, frequently nude Hannah just as irresistible as Paul and Mike. I'm sure he'd be quick to list her faults, but I doubt he has any idea how irritating her self-absorption might strike those outside their orbit.

Nonetheless, I'm sure we'll be seeing more of the multi-hyphenates involved with this film. Aside from Gerwig, Osborne, Bujalski, and Duplass, co-directors include Ry Russo-Young (Orphans), Todd Rohal (Guatemalan Handshake), and composer Kevin Bewersdorf. Hannah Takes the Stairs isn't a complete disaster, but I felt relieved when it ended. And I regret that it will, for some, be their introduction to mumblecore. Mutual Appreciation, The Puffy Chair, or Quiet City would all serve as far finer rites of initiation.

As tempting as it is to write off the term--and those involved with this super-incestuous movement seem to find it equally unappealing--I haven't written off mumblecore yet, and look forward to seeing what these folks cook up next. The key word here is cook. Joe Swanberg may have overseen the film, his follow-up to Kissing on the Mouth and LOL (now available on DVD), but his co-directors must share part of the blame--or credit, if it strikes your fancy. When it comes to politics, democracy is a wonderful thing. In the world of film, however... Well, let's just say eight's a crowd.


Hannah Takes the Stairs, part of the series Mumble Without a Cause, opens at the Northwest Film Forum on 9/28. Joe Swanberg will be in attendance for the screenings on 10/3. The NWFF is located at 1515 12th Ave. between Pike and Pine on Capitol Hill. For more information, please click here or call 206-329-2629. Images from Hannah Takes the Stairs.
Posted by kathy fennessy at 2:00 AM