I Wasn't Born to Have a Bad Time 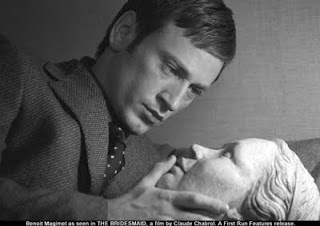 "The family is
one of the big-
gest frauds ev-
er invented...
the family tree
is a monstrous
invention.
People boast-
ing of one of
their ancestors being the Pope's official mustard-supplier! It's pathetic!"
-- Claude Chabrol on family life

Critics often compare Claude Chabrol to Alfred Hitchcock, and
the analogy makes perfect sense. Like his British predecessor, the
French helmer works in the suspense genre, and he's a master at his
craft, but while I don't mean to suggest that Hitchcock didn't have a
sense of humor--he did, of course, and a sly one at that--Chabrol's
films are funnier. Not everyone picks up on that. Those who don't
must surely see him as a pale imitation of Sir Alfred. Their loss.

At the press screening, for instance, the audience was as silent
as the grave, except for two jokers in front (one of whom was me).
Sure, Chabrol's humor is perverse--but that's what I like best about
it. I think that's also why it flies under the radar of the more literal-
minded. Or to be more charitable: it may not be to their taste.

As for The Bridesmaid, it isn't Chabrol's best film, but it may be
the funniest (and his movies are always worth a look). No one would
confuse it for a standard comedy, but there are humorous bits woven
throughout, most revolving around the family bust pictured above.

The fact that the entire cast plays the material straight adds to the
enjoyment. In short, Phillipe (Benoît Magimel, who starred in Chab-
rol's The Flower of Evil) lives with his widowed mother, Christine (the
ever-radiant Aurore Clément), and two sisters. The eldest, Sophie, is
preparing to get married. No one in the film questions why a gainful-
ly employed man in his 30s would still be living at home, but Chab-
rol hints that he's more like a husband to his mother than a son. 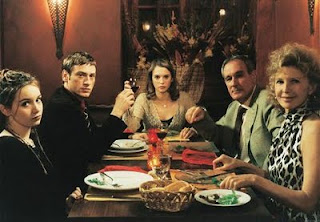 Though theirs
isn't a physic-
ally incestuous
relationship,
there's some-
thing vaguely
creepy about
it, like the
proprietary
looks Phillipe
often throws
at Christine
or the way
they stand so close together when they speak that they practically touch.

Into this hothouse environment enters the enigmatic, Iceland-born
Senta (Laura Smet), a last-minute bridesmaid at Sophie's raucous
wedding (the two barely know each other). Phillipe and Senta dev-
elop an instant rapport, and he starts spending all of his time at her
dank basement pad. It's clear to everyone that something isn't quite
right with Senta, who claims to be an actress-model. Phillipe doesn't
seem to care, though he does hide the relationship from his family.

One day, pace Hitchcock's Strangers on a Train, Senta suggests
that Phillipe kill to prove his love for her. She'll do the same for him.
He's horrified by the idea, and doesn't plan to follow through, but he's
concerned that Senta will. And who's to say she hasn't asked this par-
ticular favor from a lover before--or that she won't do so again?

The end of the film, when it arrives, is disconcertingly abrupt. Any oth-
er director of a psychological thriller, even Hitch, would build to a big-
ger, more dramatic climax, but that's not the Chabrol way. As usual, he
raises more questions than he answers, but the somewhat inconclusive
conclusion makes sense in retrospect. This is Chabrol's second Ruth
Rendell adaptation after 1995's La Cérémonie. While that one may
be the superior effort, The Bridesmaid is more fun. Sexier, too.