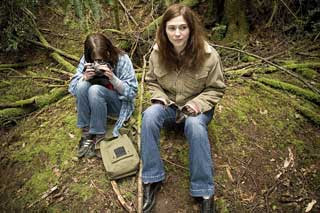 Must be something in the air. First, there was 2004 romantic comedy 13 Going on 30 with Jennifer Garner. Then a few weeks ago, pop-rocker Pink released I'm Not Dead, featuring "Conversations With My 13 Year Old Self." A case could also be made for the 2003 Freaky Friday remake with Jamie Lee Curtis and Lindsay Lohan. When the two switch places, the middle-aged mom remembers what it's like to be a teenager, while the daughter finds out what it's like to be an adult.

Now in this locally-produced feature, writer/director Lynn Shelton posits a situation in which the "13-year-old self" (Maggie Brown) of 23-year-old Kate (the appealing Amber Hubert) goes from being a distant memory to a living, breathing presence. Whether fans of mainstream entertainment will take to it with the same degree of enthusiasm, I couldn't say (though it would be cool if they did). What interests me more is that these artists are all tackling the same idea, but in different ways.

As We Go Way Back begins, Kate has broken up with her
boyfriend and is wandering from tryst to tryst, but isn't con-
necting with anyone. Most of her attentions are concentrated
on the play she's working on, Ibsen's Hedda Gabler. The prod-
uction gets more and more convoluted as rehearsals continue,
resulting in funny scenes sure to feel familiar to anyone who's
ever worked in the theater (even dilettantes like myself, who
were only involved with the occasional high school production).

This confluence of events--the breakup, the play, her 23rd
birthday--is pulling Kate back to the past and she keeps read-
ing through the letters she wrote to her older self at 13. Her
current life isn't a bad one (dig that cozy Ballard bachelorette
pad), but the confidence she once felt has dimmed over the
years. As these encouraging words from her younger self con-
tinue to invade her consciousness, she starts to dream about
the person she used to be until one day, she materializes.

Kate is freaked out, to say the least. She tries to distance
herself from this small person, but something keeps draw-
ing her back. "Little Kate," after all, means her no harm;
she just wants the best for her older self. At this point, a
couple of other movies came to mind: Nicolas Roeg's
Don't Look Now and Jonathan Glazer's Birth.

There is, of course, a difference between seeing someone who isn't there, as in A Beautiful Mind, and seeing someone who is (but isn't what they appear to be). In the Roeg film, Donald Sutherland keeps seeing his dead daughter wandering around the streets of Venice. At the end, he catches up with her. Bad move! In the Glazer film, 10-year-old Sean convinces Nicole Kidman he's her late husband. Sean's a real boy, but is he really her husband? And if so, how can that be?
In the production notes, Shelton explains the thinking behind her central conceit:

Feeling a little lost, she [the woman in her 20s] seeks direction from those around her and expends enormous amounts of energy fulfilling the needs of everyone but herself--particularly men... What breaks my heart about it is that it was not a lack self-direction and self-respect but rather a loss. At 13, I possessed a clarity of vision and a degree of self-confidence that I marvel at today. Somehow, the experience of adolescence stole it all away and it took me years--decades, really--to get it back again.

Like Roeg and Glazer, who are exploring the delusional ways
some deal with loss, Shelton finds a unique way to bring this id-
ea to life and her touch is never heavy-handed. That said, if you
let yourself get hung up on the idea that this kid actually exists,
her film isn't for you. (In which case, I suggest you avoid the cin-
ema of Fellini, Buñuel, and Denis while you're at it.) I should also
mention that Variety's Dennis Harvey described it as "vague"
and "weightless," leading me to believe that women will find the
film more substantial than men, but I'd love to be proven wrong.

While We Go Way Back is lighter than Don't Look Now or
Birth, it too discourages passive viewing (much as I enjoyed
Freaky Friday, the movie did all the heavy-lifting for me).
In that sense, I was reminded of Old Joy, which is also set in
the Northwest and revolves around a couple of thirtysome-
things revisiting a friendship that will never be what it on-
ce was. The two would make for a nifty double bill.

Although I wouldn't say I saw myself in Kate, she felt as
real to me as the scruffy characters in Kelly Reichardt's
feature, and I was moved by her dilemma. I mean, what
would you do if confronted by your younger self? (Or the
older, creepier version of someone who used to a big part
of your life?) Heck, I'd wanna run away, too. Shelton's point
is that some degree of confrontation or reconciliation is
necessary to move forward. We Go Way Back featur-
es music by Laura Viers and songs by the Decemberists,
the Lights, and other local favorites. I loved this film.

Endnote: Image by Mark Sullo.
Posted by kathy fennessy at 10:31 AM