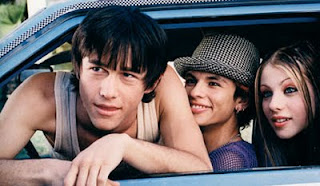 Now that SIFF is over, I've had time to transcribe more of my interview with Araki.

Since my last post, he won the Golden Space Needle for best director and Joseph Gordon-Levitt won for best actor. I'm thrilled for both and only wish Brady Corbet had been rewarded for his equally excellent performance--the film wouldn't work as well if the two weren't evenly matched. Mysterious Skin opens today at the Harvard Exit.

In this excerpt we talk about the author and cast. Click here for part one.

Fennessy: I know you know [author] Scott Heim well, but
did you get to know him before you read the book or after?

Araki: It wasn't until after I read the book that we got in contact
and corresponded and we'd send [each other] little music tapes.

Fennessy: Does he live in Kansas?

Fennessy: There's that whole New York section [in the film].

Araki: Yeah. So he lived in New York for awhile.

Fennessy: I like it that Joseph Gordon-Levitt went to Columbia
[for two semesters before deciding he missed acting too much].

Araki: [Laughs] It's all about Columbia.

Fennessy: I just read a piece in the LA Weekly a friend sent to me, which
was fortunate. A really good interview with him. He came across really well.

Araki: Joe has been acting since he was a little kid [starting at six years old].

Fennessy: I remember him from The Juror, so I
can say I've seen him in things he did before Third
Rock from the Sun. He played Demi Moore's son.

Araki: He was in Angels in the Outfield [and 10 Things I Hate About You].

Fennessy: That I haven't seen.

Araki: He's been in all these movies, from when he was very small. He's such a special person. He's so bright and so talented and so serious about what he does. But he's really down to earth. He has a really good head on his shoulders. I really think that there's no limit to his possibilities. He can do anything he wants.

Fennessy: One of the things I really wanted to talk to you about is casting and you've already kind of gone there, but how involved were you--I guess it's a two-part question: How involved are you usually and how involved were you in this film, because the casting is so good. I didn't feel there was a weak link.

Araki: We were so lucky with this cast. It's the most amazing cast I've ever worked with, everybody down to--I mean, not just Brady and Joe and Michelle [Trachtenberg] and Jeff [Licon] and Bill Sage and Mary Rajskub and, of course, Elisabeth Shue [Neil's mother]--but down to Billy Drago [one of Neil's tricks in New York]--

Fennessy: That's one of the best things Drago has ever done.

Araki: [Agrees] Billy Drago and Richard Riehle [a particularly vicious trick]. They literally only worked for two days, but everybody down to the smallest parts were all so amazing and they all brought so much to their scenes. It was a low-budget indie film, so we didn't have a huge rehearsal time and we didn't have a lot of luxuries.

And that's where we end (for the time being). If you're
a Gordon-Levitt fan, you might be interested to know
that the first season of Third Rock releases on July 26.

Later this year, he'll be appearing in another independent drama called Brick. I don't know much about it, but I understand he gives another great performance (the little seen festival favorite Manic helped to convince Araki to cast him in Mysterious Skin). Meanwhile, Araki says he's already started working on his next project, his first full-on genre effort: a horror movie.

Click here for part three.
Posted by kathy fennessy at 2:51 AM