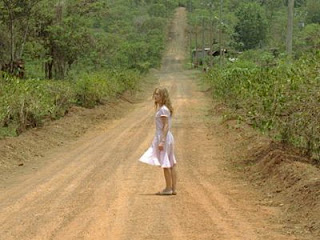 Coffee's
coffee.
Not worth
dying for.
-- A work-
er to Maria

Since the 1980s, French filmmaker Claire Denis has alternated between big movies, like 1999's Beau Travail, and smaller ones, like 2002's Friday Night (Vendredi Soir). Regardless as to their breadth and scope, there's an intimacy to all of her films as she observes her characters closely, allows each scene to breathe, and keeps dialogue to a bare minimum.

From the start, White Material registers as one of her more ambitious
productions. Clad in a light cotton dress, a foundation-free Isabelle Huppert wanders alone through a devastated landscape before Denis reveals her character's identity and the (general) location of the story.


Maria Vial (Huppert) turns out to be someone who believes she's special--and maybe she is. A coffee plantation owner, she lives in an unnamed African nation filled with, in her words, "dirty whites." As the French army leaves, they recommend she do the same. Her neighbors also hasten her departure, but Maria needs five days to put her crops in order. While the soldiers fly away in a helicopter, she whispers under her breath, "Pretentious, arrogant, ignorant." Good riddance to bad rubbish.

Meanwhile, an injured boxer (Chocolat's Isaach De Bankolé) heads
towards her remote property. Along the way, he passes rows of dead
bodies that recall the genocide in Rwanda. Then, he spots a band of
child soldiers, one of whom cradles a gold lighter bearing the initials
A.V. (he took it from Maria's property). "White material," he calls it.

When they meet, the Boxer asks Maria if she's seen his
uncle. She says she hasn't,
but she allows him to stay.

After her workers split the
scene, she leaves him be-
hind to look for replacements, while her father-in-law (The Intruder's
Michel Subor) calmly takes a bath and her son, Manuel (Nicolas Du-
vauchelle), tries to sleep away the day. All the while, a pirate radio
DJ encourages the rebels to hunt the Boxer down and kill him.

Maria runs into her husband, André (a nicely subdued Christophe
Lambert), while rounding up workers. He neglects to tell her that he's
been trying to sell the plantation. Along with her young stepson, they
head back to the ranch. Though she's extended their stay for econom-
ic reasons, she endangers her family by doing so. A good provider can
still be a bad parent. Similarly: bravery can register as recklessness.

While she goes about her business, the child soldiers sneak into her house. They rifle through the Vial belongings and humiliate a family member, who takes the abuse particularly poorly. I was hoping Denis wouldn't go to ex-
tremes to make her point, but the film takes a proto-punk page from Mar-
tin Scorsese's Taxi Driver playbook, and I found that development deep-
ly disappointing. What was subtle becomes, for a time, overstated.

The situation worsens from there, but at least Denis moves away from the
vigilante subplot. Suffice to say, the person who goes crazy was probably
disturbed in the first place. Though I can understand why Denis is critical
of Maria, and people like her, she takes it too far. Granted, movies about white privilege are rarely fun, and there's no reason they should be, but Denis is rarely so cynical. That doesn't make White Material a bad mo-
vie--and Huppert offers great value--but it certainly makes it a bummer.

White Material continues at the Harvard Exit through 12/24.
The theater is located at 4500 9th Avenue NE on Capitol Hill.
For more information, please click here. Images from IFC.
Posted by kathy fennessy at 2:00 PM No comments: 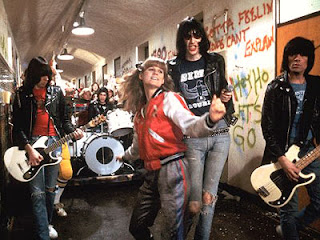 As with Hair and The Rocky Horror Picture Show, Rock 'n' Roll High School pivots around the idea that the freaks have something to teach the squares, namely: how to live.

Unlike its predecessors, Allan Arkush's first feature crosses the line separating the transgressive from the anarchic. Rocky Horror also builds to a big finish, but it's a tragedy (the failure of an impossible dream), not a triumph (fantasy made flesh).
Vince Van Patten plays the designated Brad: football captain Tom Roberts. Kate (Dey Young) is the cute nerd who'd give anything to be his girl; a future Janet, you might say. Principal Togar (Mary Woronov, doing her best Eve Arden impression) wishes more students would follow his lead. Death Race 2000 director Paul Bartel (Woronov's husband) plays Mr. McGree, a music teacher who longs to let his freak flag fly. By introducing these four dweebs in a row, Arkush sets the scene: before the film comes to an end, rock 'n' roll will set them free or eat them alive.

Instead of a male rebel rocker, Arkush and co-writers Richard Whitley and Russ Dvonch, who plays the Harold Lloyd-inspired "Freshman," offer a female: Riff Randell (P.J. Soles). Sure, she's a Ramones fan, but she's also a go-getter, a DJ who wants to write songs for the band.
More popular than cool, Tom could get any girl at Vince Lombardi High School, but he covets Riff, who lusts after leggy lead singer Joey Ramone, so he seeks advice from school fixer Eaglebauer (Clint Howard), a sort of freaky square.

In the first of four commentary tracks, Whitley explains that he originally envisioned the scenario with the Yardbirds, while Roger Corman encouraged the team to call the film Disco High in an attempt to ride Saturday Night Fever's box office-busting coattails.
Other artists under consideration included Todd Rundgren, Cheap Trick, Van Halen, and Devo, while Richard Meltzer, Darby Crash, and Pat Smear all show up as extras.

Meanwhile, the NYC-based Ramones enter the L.A. scene by performing in a moving convertible--like something out of Grease, but hipper (Joey's even chomping on chicken vindaloo). Riff buys everyone tickets to the concert, and the anarchy begins.
Though Arkush and Co. fail to explain where she got $1000 (100 X $10), this is the kind of film where it doesn't really matter. She has her own bathroom, so her unseen family must have money, and for once, that's okay.

Then Togar relieves Randell of her tickets until she wins them back through a radio contest. Instead of Tom, she takes Kate. Naturally, everyone ends up at the show, except for the principal (even McGree can be seen bopping about in his beret).
Unlike Suburbia, which features a few different bands at one gig, the Ramones receive a generous amount of time, and they deliver a great set--the way "Teenage Lobotomy" comes complete with subtitles that grow as the song goes along adds to the fun.

After Togar banishes rock from the school, the students take their revenge with support from Da Bruddas and, by extension, the MC5 (the riot occurs while Riff's copy of Back in the USA plays on the public address system). The famously fiery ending builds on previous teen-revenge touchstones like Jean Vigo's Zero for Conduct and Lindsay Anderson's If..., influences the filmmaker readily acknowledges in his commentary.

Part of the reason Rock 'n' Roll High School works so well is that it offers the kind of throwaway gags that filled the pages of Mad magazine. Brownsville Station's "Smokin' in the Boy's Room" doesn't just set the scene for a cloud of cigarette smoke, but for drug deals and hookah parties--all taking place within the same restroom.
See also: the paper airplane, the pinhead, the scalper, the nuns, and the giant mouse (truly a masterstroke). Says Arkush, "A lot of this stuff was just sort of made up on the spot." For my money, the only gag that doesn't work concerns the cafeteria-worker food-pelting. Compared to the rest of this good-natured film, it's unnecessarily cruel.

Additional extras on this special edition Shout Factory disc include the press book, photo galleries, radio spots, script pages from deleted scenes, and three more commentary tracks: Corman and Young; Arkush, Howard, and Soles (she admits it took some time to get into the Ramones); and Whitley and Dvonch (second unit director Joe Dante receives a story credit). In the first track, producer Michael Finnell joins Arkush and Whitley.

In his introduction, Arkush, who went on to create Crossing Jordan and Heroes, says that Rock 'n' Roll High School "has a very, very special place in my heart." According to Corman, it was shot in 15 days for around $200,000 (Arkush remembers a 20-day shoot).
Against all odds, the film made its way to Anchorage, AK where I caught a screening at the Fireweed Theater. Though they had just released their fourth LP, Road to Ruin, I had no idea who the Ramones were, but I loved the film. I still do.

Previous: Suburbia. Next: Ladies and Gentleman, the Fabulous Stains.

Roger Corman wanted the poster look exactly like the one for National Lampoon's Animal House. He got his wish. Image from TampaBay.com.
Posted by kathy fennessy at 8:00 PM No comments: