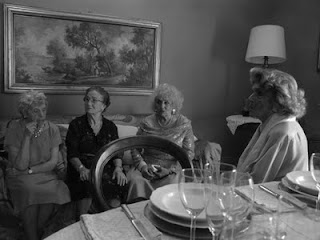 Matteo Garrone, the man behind Gomorrah, presents a different side of Italy in co-writer Gianni Di Gregorio's Mid-August Lunch (this lend-a-brother-a-hand move recalls David Lynch's presentation of Herzog's My Son, My Son, What Have Ye Done?).

Garrone's sprawling film was set in and around a Mob-infested housing complex, while Di Gregorio's gentle comedy takes place in a working-class condominium. The writer-turned-filmmaker plays Gianni, a Roman bachelor who looks after and reads
to his 93-year-old mother (Valeria De Franciscis), an Alexandre Dumas enthusiast.

When the building manager (Alfonso Santagata) offers to cut him a break if he'll take in his mother (Marina Cacciotti) for the weekend, Gianni has no choice but to agree. Short on cash, he can't afford the repairs the condo board wants him to make.


"Have a drink. It calms everything."

Gianni's mother, frail but sharp, gives her assent and gets dolled up for the occasion. Without checking, Alfonso also brings his Aunt Maria (Maria Calì). So while he goes off on a trip to the country with his girlfriend, Gianna is stuck inside a condo with three old ladies in the midst of a heatwave. Things otherwise get off to a good start.

A sleepy-eyed gent in a plaid apron, Gianni willingly cooks and cleans for the trio,
but then his doctor (Marcello Ottolenghi) asks him to add his mother, Grazia (Grazia Cesarini Sforza), to the mix while he works the night shift, so three becomes four, including one who takes a different medication every few hours and gets violent headaches from dairy products (none of this, incidentally, plays out as farce).

In short order, Valeria, who doesn't want to eat with the others, asks for her tel-
evision back, and Maria pouts. The other ladies have their own not-unreasonab-
le requests, and the selfless Gianni does his level best to address each one.

During the night, though, one of the four disappears, and Gianni learns that his
responsibility to the ladies and to their relations are at cross purposes. Basical-
ly, he's supposed to keep them in line, but each woman has a mind of her own.

By the end, his perspective has changed. Fortunately, no one has to fall sick or drop dead for this shift to occur. Di Gregorio avoids easy tears and cheap laughs, which might make Mid-August Lunch too subtle for some, but it's a welcome antidote to the parade of pictures that present old age with fear, distaste, or contempt.

Update: The film has been held over through Thurs., 5/13.
Posted by kathy fennessy at 11:00 PM No comments:

The Audacity of Man 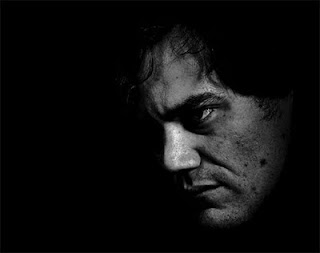 I want to see my mother's feet dancing her to heaven. -- Brad Macallum (Michael Shannon)

The film takes place in Southern California, the story comes from an actual case, and the cast includes Willem Dafoe (Wild at Heart) and Grace Zabriskie (Inland Empire).

It may sound like a David Lynch picture, except it isn't. Through his Absurda banner, Lynch served as producer, while Werner Herzog directed (though Michael Shannon and Brad Dourif also appeared in Herzog's Bad Lieutenant: Port of Call New Orleans).

If Bad Lieutenant was Herzog's swamp noir, the San Diego-set My Son, My Son, What Have Ye Done? is his desert noir. In another Lynchian touch, two cops (Dafoe and Michael Peña) provide our entry into the story. Called to the scene of a crime, they meet a bystander (Shannon) who looks at them and utters, "Razzle dazzle" (the words printed on his coffee mug). They push past him to the lifeless body inside. 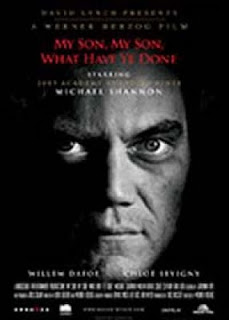 The killer failed to cover his tracks, and a sword lies in full view of the victim (Zab-
riskie). Neighbor Mrs. Roberts (Irma Hall, another Bad Lieutenant vet) claims that her son, Shannon's Brad Macallam, had something to do with it. Just before his fiancée, Ingrid (Chloë Sevigny), arrives, Herzog flashes back to Brad's days in Peru.

While Dafoe's Det. Havenhurst tries to get him to leave the house, to which he re-
turned and where he claims to have taken two hostages, Herzog continues to rifle through the days before Mrs. Macallam's murder and to Brad's time in South Amer-
ica. From the way Ingrid describes things, it sounds as if the actor was turning into a schizophrenic, since he became convinced he should only listen to his "inner voice."

The flashbacks, which lend the film the feel of a fifties melodrama, reveal other
problems, like the fact that Brad and Ingrid lived with Mrs. Macallam, who looks like
a warped version of Jane Wyman in All That Heaven Allows, in a flamingo-pink ranch house with flamingos in the backyard, and every manner of flamingo inside, from posters to lamps (there's a Twin Peaks vibe to these strangely-lit sequences).

The flashbacks continue: Brad's visit to his Uncle Ted's ostrich farm, a trip to Tijua-
na with Ingrid and another to Toronto with his mother, and his casting in Sophocles' famously matricidal Oresteia (Dourif plays the uncle, Udo Kier plays the director).

Combined with Ernst Reijseger's off-kilter score and Peter Zeitlinger's sun-bleached cinematography, it all exerts a certain queasy fascination, but My Son, My Son, much like those ostriches, never really takes flight. It's rarely as darkly humorous as Bad Lieutenant or as seductively suspenseful as one of Lynch's puzzle-box mysteries.

Furthermore, the acting has an intentionally flat quality that recalls home movies and soap operas, despite the talent involved. It's as if Herzog cooked the whole thing up in one peyote-filled night and shot it the next week. If Nicolas Cage's loopy lieuten-
ant was hilariously over-the-top, Shannon invests Brad with a more recessive quality, which gives his madman greater credibility--at the expense of entertainment value.

And yet...there's a scene in the woods with Shannon, Dourif, and a midget in a tuxedo that offers the sort of what-the-fuck magic that makes even the lesser films of Herzog and Lynch more interesting than most. Fortunately, there are enough of those moments, especially towards the end, to make My Son, My Son worthwhile, though not enough to make it the messed-up masterpiece it might have been.

Posted by kathy fennessy at 10:30 PM No comments: