Tony Manero: The Man in the White Suit 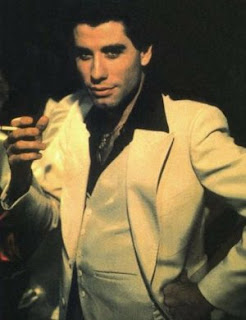 In Badham's 1977 cultural touchstone, the lanky lead imagined himself as a sort of disco-dancing Al Pacino: tough, but smooth (note the Serpico poster on his wall). The wiry Raúl, on the other hand, actually looks like the Pacino of a decade ago--before the eye work and the curiously orange skin. If he isn't exactly smooth, he's tougher than the preening Tony ("Watch the hair!"), because this aspiring entertainer doubles as a brutal killer.

In his second film, Larraín establishes Raúl's contradictory nature in brief, but ef-
fective brushstrokes: Peralta's obsession with Saturday Night Fever provides a release from the unrelenting gloom of life under Augusto Pinochet, while his lethal escap-
ades allow him to eliminate rivals and to obtain goods he can't otherwise afford.

As with Pacino's Tony Montana, Travolta's blue-collar Manero wasn't born to wealth either, but he worked for his money. As Raúl's junkyard associate tells him, "Things cost what they cost, not what you want them to cost," sensible words that mean no-
thing to a cold-blooded sociopath. When Raúl decides that his performance space needs a lighted-glass floor and a mirror ball, in order to recreate Fever's 2001 Od-
yssey in miniature, he finds some cruelly creative ways to make it happen (he and his three-person troupe live in the apartments above the cantina where they dance).

Further, he doesn't lack for female companionship, but like Warren Beatty's bank robber in Bonnie and Clyde, Raúl's impotence extends to his entire existence. Unlike Clyde Barrow, however, his appeal for the opposite sex strains credibility. The low-rent Pinochet of his barrio, he's cold and grubby, and neither charms nor satisfies
the ladies in his life, which seems to be Larraín's deeply cynical point. i.e. that the Chilean dictator's antipathy acted as an aphrodisiac on his more masochistic citizens.

Though he's in nearly every frame, trained stage actor and co-writer Castro gives
an otherwise vanity-free performance. If most antiheroes have one or two compen-
sating qualities, Raúl is about as likeable as the title character in Henry: Portrait of a Serial Killer, and those who failed to find the humor in Henry are likely to feel the same way about Tony Manero, its unlikely socio-political South American analogue.

While some have described the film as "ugly," both literally and figuratively, there's a beauty to Larraín's direction, the Super 16 cinematography (blown up to 35mm), and odd out-of-focus shot, making it a fever dream in every sense of the phrase.

"No, Tony! You can't fuck the future. The future fucks you! It catches up with you and it fucks you if you ain't planned for it!"
-- Fusco (Sam Coppola)

He’s Gotta Have It: Part Six

A Chat with Barry Jenkins (click here for part five)

Are any of your short films available on DVD?

The thing about going to Florida State University is that I wouldn’t be a filmmaker if there wasn’t a film school there. That’s just fact. And the beauty of Florida State is that you pay tuition which, for me as a Florida student, was $1000 a semester and everything was covered: the equipment, stock, editing facilities, crew. I mean, it was the works, it was everything, but they own your films when you’re done with them.

I had the opposite experience. I majored in art, and aside from the expensive tuition, we had to buy canvas and paint, which adds up, so that’s really interesting.
I probably paid more than you, and I own those works, but I was in debt for a long time. I went to Whitman which, for the Northwest, is a really expensive school.

The training was invaluable, it was absolutely invaluable.

Maybe they’ll do something with them, like a collection of student films.

My Josephine is available as part of Crafting Short Screenplays. There’s a chapter on Josephine and a DVD comes with the book. The screenplay and movie are in there.

That’s cool. That’s an interesting way to see it. Many times when I see a
first feature that I like, I want to go back and watch the director’s shorts.

That’s how I fell in love with Lynn Ramsay. I saw her film Morvern Callar…

I saw her shorts after her features.

I did too. I met her at the Telluride Film Festival in the student symposium.

What’s that? I’ve only heard of the film festival.

You haven’t heard of the symposium? Well, the festival has an education program. You write an essay, and they invite 50 students out, and you watch the movies.

It’s an expensive festival, so that’s a good deal.

It’s really expensive, so you get a free pass, you just travel yourself out. You have to put yourself up, too, and they encourage you to bundle up, like 10 kids in a con-
do. You have a certain schedule: you see films, and after you watch them, you get an hour in a classroom setting with the director. It was wonderful. We watched Morvern Callar, and then we sat down and talked with Lynne for an hour. We watched City of God, and then we sat down and talked with Fernando [Meirelles] for an hour. We saw Russian Ark, and then we sat and talked about it with the DP [Tilman Büttner] for an hour. We saw Spider, and we talked to [David] Cronenberg for an hour. It was abso-
lutely ridiculous. Even Dave McKean was there with these two short films, and I don’t think anyone’s ever seen those movies. We got to sit down with him. It was a really great experience. So, I watched Morvern Callar, and I was like, “I love this film.” Lynne brought Ratcatcher, which I also loved, and then I saw the shorts.

The shorts are really good, too. I saw them…well, maybe I’ve only seen one. I have that Cinema16 release, a series of great foreign short films, so I finally got caught up with the short that won the Oscar. And another one, I think it’s called Fly.

That’s Wasp, from a different filmmaker, Andrea Arnold, who was also at Telluride.

That’s funny. I do confuse the two.

She was at Telluride with Wasp. She’s great, she’s funny.

[They're both female Scottish filmmakers born in the '60s. Though Ramsay has never won an Oscar, she won Cannes Jury Awards for Gasman and Small Deaths.]

You and Lynn Shelton definitely like some of the same filmmakers.

Lynn and I are in love with the same filmmakers: Yes! [laughs]

I became aware of her because of her first film…

We Go Way Back.

Which I really hope more people get to see. I really wanted to meet
her, and she’s the friend of a friend, so it was easy to set up. I com-
pared it to [the work of] Claire Denis, which made her so happy.

Jenkins and I proceeded to chat for another 10 minutes or so, mostly about the struggle
to pay the rent while shooting a film (during his tenure at Banana Republic in, I think, the shipping department, he wrote three screenplays) and adaptations, like Morvern Callar and John Hillcoat's upcoming version of Cormac McCarthy's The Road, but this is the point at which my tape ends, and I only brought one. Incidentally, my recorder ceased to function halfway through our conversation, so Jenkins took a look at it, determined the problem,
and with the judicious insertion of a tiny piece of crumpled-up paper, he fixed it.

Endnote: Images from Popcorn Reel and Strike Anywhere Films.
Posted by kathy fennessy at 8:30 AM No comments: