"Everything about being indie is tied to not being black."
--Micah (Wyatt Cenac)

As it turns out, Joanne left her wallet in the cab, giving Micah an excuse to contact someone who might not otherwise expect to see him again. Using his laptop, he tracks her down, only to find out she has a live-in boyfriend, a never-seen white artist who happens to have a few dollars. So, he's poor, she's not, but attraction is attraction--why does she invite him in if she doesn't share his feelings?

With her boyfriend in London, maybe Joanne is lonely, but that doesn't explain the infidelity, unless that's par for her course. Either way, there's nothing wrong in sharing a cup of coffee. After which, Micah accompanies her on an errand, which leads to bike riding and museum-going, followed by a visit to his Tenderloin pad (Joanne lives in the tonier Marina).

Jenkins shows, but he doesn't tell. The characters don't say everything that passes through their minds—it wouldn't seem naturalistic if they did—so their gestures and the way he stages scenes fills in the blanks.

Similarly, Laxton's hi-def cinematography blurs the distinction between black and white and color. Since San Francisco's African-American population hovers around 7%, the eye-catching move would seem to mark an aesthetic choice, a symbolic selection, or a calculated combination of the two. One way or the other: it looks cool. And it's worth noting that there's a difference between living in San Francisco and working there.

Since the mid-1970s, my father has lived in Daly City, San Francisco, Oakland, and Alameda, so I got to know those cities when I would visit him over the years. If the City by the Bay has a small black population, the story changes once you move into the suburbs. There's a reason, after all, that the Black Panther Party--along with hiphop acts like Digital Underground, Tupac, and Paris--emerged from the East Bay.

That said, Medicine for Melancholy isn't strictly about race, infidelity, gentrification, or class differences. Instead, it touches on all of those topics from the perspective of one couple's sojourn. If Jenkins took a didactic approach, the 29-year-old wouldn't be attracting admirers like Shelton.

Nonetheless, his film won't work as well for those who don't find these characters compelling, and some won't, since Micah can be sarcastic and Joanne can be a snob, but that just adds to the realism. Too often, rom-coms revolve around the conceit that the central duo must be winning, while the third wheel that threatens their union is a total loser.

In Before
Sunrise, one
possible in-
spiration, the
main stumbling
block is geo-
graphy. The movie ends before we find out whether the two travelers will meet again, a question Richard Linklater answers in the 2004 sequel Before Sunset. Does it matter whether Micah and Joanne wind up together or is it enough to spend a day in their company? I won't say how things turn out other than that Jenkins's debut is more polished than Aaron Katz's Quiet City, but scrappier than Linklater's studio duo—and I'm quite fond of all three.

But that doesn't mean it's a black film trying to be white, any more than recording artists like Bloc Party, Dangermouse, or the Dirtbombs are black or mixed artists trying to be white--or trying not to be black (Micah specifically mentions TV on the Radio). They are, instead, products of multi-cultural cities, like London, Atlanta, and Detroit. And Medicine for Melancholy does what the best films about relationships should do: it presents so many believable specifics that it becomes universal.

"I hate the city, but I love the city."
--Micah to Joanne

Medicine for Melancholy continues at the Northwest Film Forum through Thurs., 2/26. Director in attendance Mon.-Thurs. The NWFF is located at 1515 12th Ave. For more information, please click here or call 206-829-7863. Image from  The New York Times via IFC Films.
Posted by kathy fennessy at 11:00 AM No comments:

I'm so thrilled that this gorgeously shot and edited film is coming to our town! One of Filmmaker Magazine's "25 to Watch" last year, director Barry Jenkins has crafted something really special, with his partners in crime James Laxton (cinematographer) and Nat Sanders (editor; and the same man who edited my latest feature, Humpday). Please mark your calendar and come out to experience and celebrate this exquisite gem of a film!
-- Lynn Shelton to her mailing list

Most young urban dwellers have experienced something similar: the awkward morning after a one-night stand. The evening before could've been boom or bust. It doesn't really matter. Things always look—and feel—different in the cold, sober, and sometimes hungover light of day.

Micah (The Daily Show's Wyatt Cenac) tries to get a conversation going with Joanne (Tracey Heggins), but she seems more interested in grabbing a bite to eat, and then moving on with her day. Is she feeling guilt or regret? Does she find him unattractive now that she's gotten a closer look?

She may have valid reasons for her diffidence, but it's hard not to sympathize with Micah. He seems like a decent guy, and doesn't prevaricate, like admitting upfront that he didn't catch Joanne's name (she lies and says it's Angela). Whether or not he's hoping for something more, he's just trying to get to know the woman with whom he shared an intimate encounter...even if neither party remembers it very well. 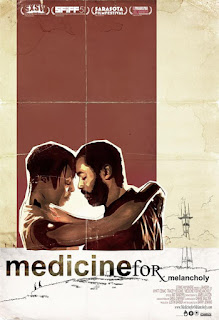 The awkwardness escalates on the silent cab ride to their respective homes (their tryst took place at the house of a mutual friend). Then Joanne leaves the cab and walks out of his life. If that's all there was to it, Medicine for Melancholy, Barry Jenkins's first feature, would be a short, but these two will see each other again.

Medicine for Melancholy plays the Northwest Film Forum from Fri., 2/20, through Thurs., 2/26. Director in attendance Mon.-Thurs. (interview on the way). Shelton, Jenkins, and Nina Paley (Sita Sings the Blues) are competing for this year's Film Independent "Someone to Watch" Award. In addition, Laxton is up for best cinematography. The Independent Spirit Awards take place on Sat., 2/21, the day before the Oscar ceremony, and air on IFC at 5pm* and AMC at 10pm. The NWFF is located at 1515 12th Ave. For more information, please click here. Images from The Austin Chronicle and FirstShowing.Net.

* Pacific Standard time. It airs at 2pm on the East Coast.
Posted by kathy fennessy at 9:00 PM No comments:

A Girl and Her Dog: Part Two

Then Lucy is gone, and Wendy is stuck in a strange town, all alone with a dead car. No one is purposefully mean to her, and some of the locals, like Walter Dalton's security guard, are actually quite kind, but they can't solve all her problems.

And if she isn't an idiot, Wendy isn't exactly a rocket scientist either, i.e.
she's like most of us, regardless as to how she ended up in her predicament.

If while watching Half Nelson you thought, "But a crack addict shouldn't teach school," you'll surely agree with John Robinson's grocery clerk that poor people like Wendy shouldn't have pets, in which case this film isn't for you (and a little compassion might be in order). Then again, whenever I see a rich person feeding their dog chocolate, I tend to wonder if they should be allowed to have pets (Will Patton
and Larry Fessenden play two characters who cause Wendy further stress).

After her dog, Wendy is her own best friend and her own worst enemy. Intention-
al or not, Reichardt's film also recalls Robert Bresson's Mouchette and Jean-Pierre
and Luc Dardenne's Rosetta. The impoverished women in those works aren't heroic either. They make bad choices, they suffer the consequences, but their directors don't judge them for their mistakes—not with so few options available to them.

Despite such distressing parallels, Reichardt hasn't made a tragedy. Wendy and
Lucy isn't even depressing, though it seems to start out that way. Instead, it ends
on a note of sadness that can also be read as possibility. It's all a matter of per-
spective. Where I saw hope, you may see something completely different.

Since I first watched the movie in late December, I've had almost two months to
think about it, and whenever I do, I find myself flashing on Kris Kristofferson's ub-
er-'60s lyrics for Janis Joplin's "Me and Bobby McGee,” i.e. “Freedom's just another word for nothing left to lose / nothing don't mean nothing, honey, if it ain't free...”

By the end of the song, Bobby's gone, but the narrator lives on. Similarly, Wendy
is free from all ties and obligations, but can you be truly free in America without money? In prison, after all, even inmates get free room and board—at the tax-
payer's expense—but they can't have pets. It would be a spoiler to reveal wheth-
er or not Wendy finds Lucy. Suffice to say: she finds herself along the way.

Wendy and Lucy continues at the Varsity Theater through Thurs., 2/12. The Varsi-
ty is located at 4329 University Way NE. For more information, please call 206-781-5755. According to L.Q. Jones, "A Boy and His Dog played in the Varsity…which was
the biggest theater at that time; we played...for twelve months in a row. It did humungous business. Unbelievable!" And he planned to title the sequel (never made, unfortunately): A Girl and Her Dog. Starting on 2/13, Wendy moves to the Northwest Film Forum, where it plays through Tues., 2/17. The NWFF is located at 1515 12th Ave. For more information, please call 206-829-7863. Images from Cinema Strikes Back, Cinematic Reflections, and Oscilloscope Pictures.
Posted by kathy fennessy at 10:15 PM No comments: