The Deadly Charm of the Bourgeoisie 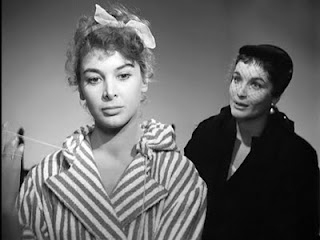 Much as I love Michelangelo Antonioni, I like the way Le Amiche begins more like an Henri-Georges Clouzot thriller (his classic Diabolique appeared the same year). First, he introduces Clelia (Eleonora Rossi Drago), one of the film's fashionable women. Then, he introduces Rosetta Savone (Madeleine Fischer), who is staying in the hotel room next to the salon manager--after the maid discovers her close to death, lying on the bed in an evening gown. (The detective even recalls Paul Meurisse.) So, Antonioni sets a mystery in motion before he's even revealed the rest of the cast.

I was expecting an Italian version of George Cukor's The Women, but the director is going for something darker--though these ladies are just as fond of mink coats and funny hats. As J. Hoberman noted in The Village Voice, Jonas Mekas and Andrew Sarris, among Le Amiche's few original American adherents (it didn't make its way to the US until 1963), felt "that this detached look at life among the rich and vapid anticipated Antonioni's 1960 breakthrough L'Avventura."

Momina de Stefani (Yvonne Furneaux) then enters the scene when she comes to
call on Rosetta, who is recovering in a Turin hospital. So, while Clelia goes about her
rounds, Momina speaks with Rosetta's associates to determine why she overdosed
the night before. In the process, she ropes Clelia into her unofficial investigation.

The cast grows larger with each scene. Momina believes Rosetta tried to take her
life out of love for Lorenzo (Gabriele Ferzetti, L'Avventura), who painted her portrait, though he's married to fellow artist Nene (Valentina Cortese). Some reviewers de-
scribe Rosetta's intentions as ambiguous, but she confirms Momina's suspicions. 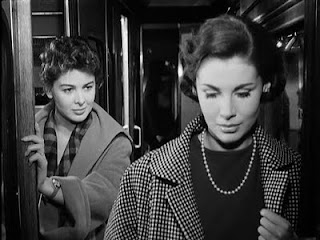 If Le Amiche has become known for bitchiness, the way Momina befriends Clelia is
actually quite sweet, especially since the latter came from blue-collar Turin before
making it in Rome, stating, "I've always worked, and I've never had time for friend-
ships." She also finds a friend in Carlo (Ettore Manni), the store foreman. While Ro-
setta's friend, Mariella (Anna Maria Pancani), finds him a "hunk," Momina's lover, ar-
chitect Cesare (Franco Fabrizi), dismisses him as "a common laborer." After Roset-
ta recovers, everyone--except Carlo--becomes part of the same social set. Unfortun-
ately, Rosetta isn't really better, and picks up right where she left off with Lorenzo.

Clelia thinks it's a bad idea, but Momina encourages the younger woman. Separated from her wealthy spouse, she thinks nothing of sleeping around, which doesn't offer much to brag about, but certainly sets Le Amiche apart from the hundreds of Italian movies where husbands cheat on their wives, and no one gives it a second thought.

Aside from Momina, the other ladies aren't as catty as their reputation suggests.
When Nene, who knows about the relationship, confronts Rosetta, she's more than a little decent about it, but that isn't what leads the part-time model to contemplate suicide again; it's that Lorenzo cares more about his lackluster career. He can't be with his successful wife, he can't be with his lover, and he doesn't seem to enjoy his own company much either. Worse yet, Rosetta's lack of identity makes her a drag.

In the end, Clelia throws away her hard-won social status to express what she thinks about Turin high society. Significantly, it's her choice, and not a fate she must undergo to prove a point about the impermeability of class and gender in 1950s Italy. Whether you agree with her actions or not, she exits with her dignity intact. 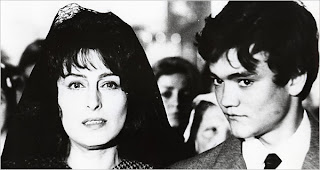 "At your age, the only woman you need is a mother."

Despite modest exposure and mixed reviews, Pier Paolo Pasolini's second feature, Mamma Roma, has only grown in stature over the years, not least because Anna Magnani gives a larger-than-life performance as the retired prostitute of the title. (In Italy, the film is so iconic that Dolce and Gabbana based their latest ad campaign around it, casting Madonna as Mamma.)

In the words of Edward Guthmann (The San Francisco Chronicle), Magnani "erupts" with "lust, laughter and carnivorous pleasure." The description is ironic, though not far off the mark, since Pasolini depicts the relationship between a mother and a son rather than a carnal union. And if you can find a review that doesn't use any of the following words to describe Magnani, good luck: earthy, bawdy, lusty, and brassy. That said, Mamma Roma doesn't entertain a single suitor during the course of the movie.

But while the openly gay filmmaker (Teorema) and his Oscar-winning lead (The Rose Tattoo) have secured their place in cinematic history, what gets lost is that Magnani shares the screen with Ettore Garofolo, who plays her 16-year-old son, also named Ettore (Garofolo, a non-pro, was waiting tables when Pasolini found him). If anything, Garofolo, who gives a more passive but no less effective performance, gets more screen time than Magnani, even if Pasolini begins the story from her point of view.

As Mamma Roma watches her former pimp, Carmine (Franco Citti), marry a villager in a tableaux that recalls The Last Supper, she raises a good-natured ruckus, singing and slinging jokes in the direction of the irritable groom. What does she care? She's finally earned enough bread to leave the countryside, collect her boy, and go legit.

To her, the town, located somewhere on the outskirts of the Eternal City, is filled with
"hicks," and she can't wait to make her escape. Upon their reunion, Ettore, a gawky lad in a bulky suit, looks at his mother as if she's just arrived from outer space. It isn't that she scares him, but that he doesn't get her. Eager to make up for lost time, Mamma Roma flutters about him like a hyperactive butterfly. Just as they're getting ready to split the scene, Carmine darkens her doorstep, threatening to tell Ettore about his mother's former profession if she doesn't give him a bundle of money.

Mamma Roma leaves anyway, knowing full well that Carmine will track her down. In Rome, she takes a job as a produce vendor. Life should be perfect, except the city starts to pull Ettore away from her. First there are the hoodlums who persuade him
to join them in a life of crime, and then there's Bruna (Silvana Corsini), the pretty 23-year-old who catches his eye. In this Oedipal tale, it can't be completely coinci-
dental that the brunette could pass for a younger copy of his 43-year-old mother.

All the boys in the neighborhood have had a roll in the hay with Bruna, but that doesn't matter to Ettore. Nor does he mind when he finds out she has an infant son (fathers hold no interest for Pasolini). He wants to buy her gifts, but has no income, so he sells a few of Mamma Roma's tango records to purchase a gold necklace. 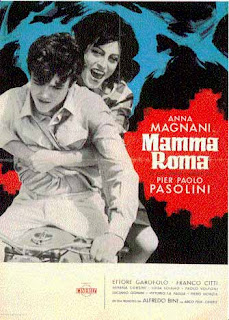 Out of desperation, Mamma Roma pulls strings to find him work (like Carmine, she
opts for blackmail). She also encourages Ettore to stop seeing Bruna, but he finds
it as hard to let go of the girl as to hang on to the job--waiter in a respectable res-
taurant--at which he turns out to be surprisingly good. The situation regresses from there, and Pasolini systematically eliminates all comedy and romance until only har-
rowing drama remains. If things don't end well, there's the sense that Mamma Ro-
ma, like Pasolini's picture, will keep on pushing, no matter what comes her way.

Whether she'll thrive or not is another matter. While she shares the same indomit-
able spirit that fuels Giulietta Masina's streetwalker in Federico Fellini's Nights of Ca-
biria, she's a different woman and this is a different story. Cabiria risks everything
for a greedy lover; Mamma Roma for a shiftless son. If the final sequence trades Christian allegory for a literal interpretation, I'd be lying if I say I wasn't moved.

Mamma Roma continues at the Northwest Film Forum through Thurs., 9/9, at 7
and 9pm (plus weekends at 5pm). The NWFF is located at 1515 12th Ave. be-
tween Pike and Pine on Capitol Hill. For more information, please click here
or call 206-829-7863. Images from The New York Times (Fondazione Aida).
Posted by kathy fennessy at 9:00 PM No comments: